Gettin’ High (and Low) in Hawaii

By Jake Reinig on October 13, 2011 in Beach, Photos, Seascapes, Travel/Landmarks

My little sister moved to the Hawaiian island of Oahu a few months ago to join a travelling circus or something. Plans I had to photograph the Grand Canyon fell through the same week as her roommate was out of town, so I took the opportunity to shack up in her clown hovel and take some time away from the day job.

Although Hawaii has never been super high on my list of photographic targets, the visit was pretty awesome. Jennifer lives on the north shore of the island and is literally a 60-second walk to some of the most famous beaches in the world. Her front yard consists of places like Waimea Bay, Pipeline, Sunset, and so on. Really, she’s living the dream, and I’m not exaggerating in the least.

In actuality she’s there on a Speech Pathology contract (do this if you want a good job that’s crazy in demand). I mention this because in addition to living in a super rad part of the world, she’s been fortunate enough to end up surrounded my some amazing people, many of whom are in similar situations. Big thanks to Emily, Erin, Carrie, the other Carrie, Jessica, “Scuba Drew” and Bret, and Susanna and Rusty for making me feel welcome. Also, to Colleen for entertaining all of us at First Friday.  :)

On to the photos!

This adorable sister and brother team, Pueo and Kalea, respectively, live with their mom Emily in the unit next to my sister’s place. They were super energetic and full of smiles, but it wasn’t until like the last 15 minutes of my trip that I got to photograph them. As you can tell, I didn’t exactly get them to keep the smiles flowing. Oh well; they and their mom were fun to hang out with. 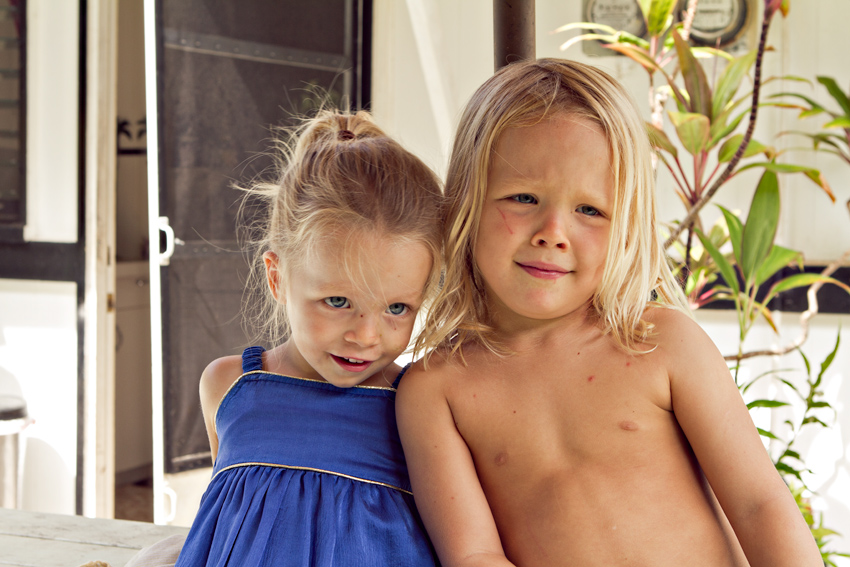 This is hanging on my sister’s front wall. I’m not exactly sure what the theme is (is it geography, or just vocabulary?), but I thought it was cute and so now I’m forcing it on you. 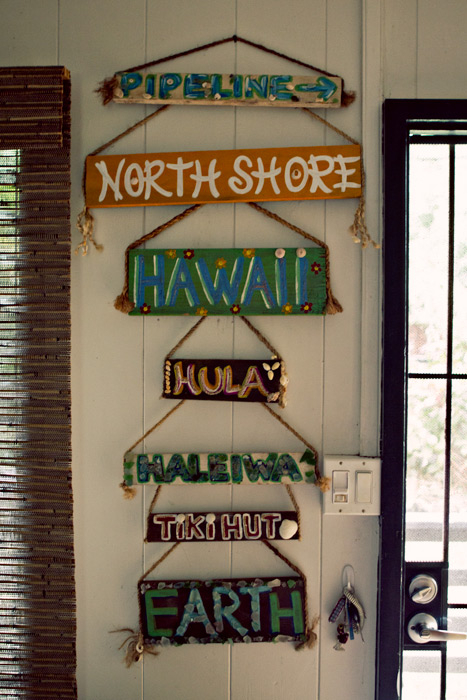 On the second day of my trip we drove along the west side of the island. This part has a heavy native population and sadly, is quite rundown. We ended up doing a hike/walk to a place called Kaena Point which my sister claimed was about 1 mile. We did it in the dead middle (i.e. hottest part) of the day, and it ended up being about 5 miles. Oh, and the monk seals she promised me at the end were missing. At least the coastline was spectacular! 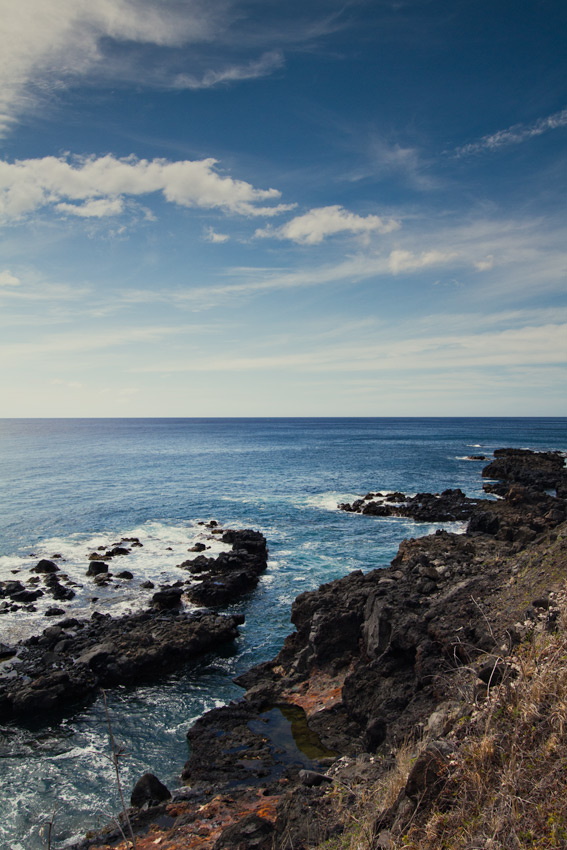 That night we hung out with her friend Carrie, who lives in the dreadfully beautiful town-thing-place of Ko Olina where Disney has it’s Aulani Resort. The next day we met Carrie again at the Polynesian Cultural Center. Then this happened: 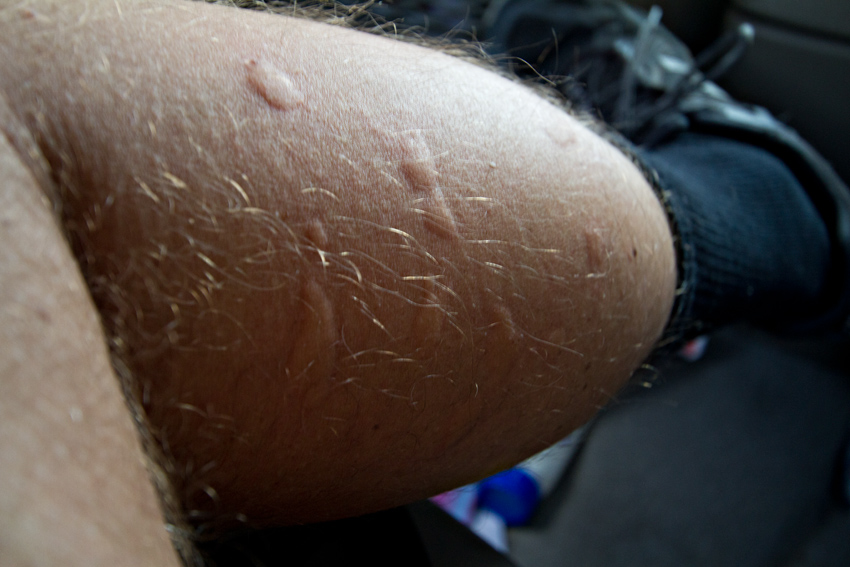 Although my deceptively clever writing would you lead you to believe that Carrie was responsible for that gross allergic reaction, those bumps (I actually had about twice that number on each leg) are the result of swarming mosquitoes at this next place, called the Byodo-In Buddhist Temple: 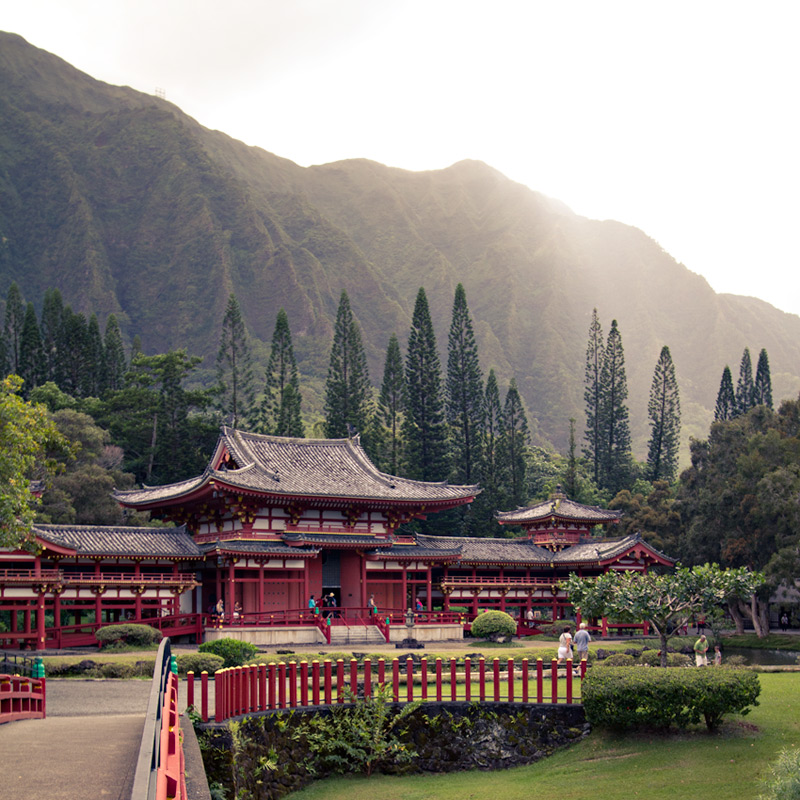 I stood in one place near a small side lake for about 5 minutes desperately waiting for a single tourist to move so I could get a particular shot. I was the main course for the residents, apparently. How’s that for dedication? Also, I blame Carrie.

Oh, and this was taken the night before while we were getting drinks at the Aulani. Even though my sister is pretty smart by most definitions, she apparently thinks all sail boats everywhere line up in front of the sunset each night so as to be the subject of photos. 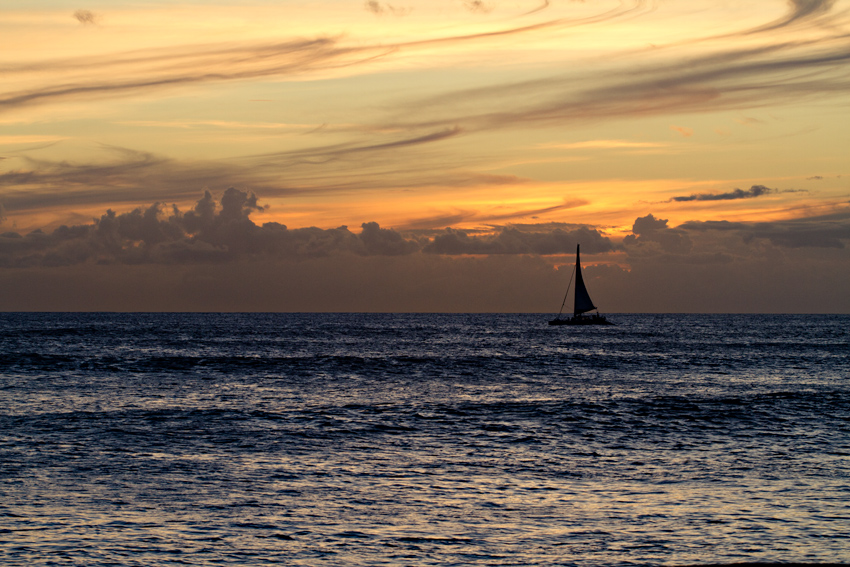 On Wednesday we hopped into a helicopter with no doors to fly around the island. I love helicopters so I jump in whenever I can, and while no doors is great for photography it can be a bit unnerving (read: fun!) when doing steep turns. The weather was pretty rough so the flight was bumpy at times. At one point we hit a big bubble o’ turbulance and the helicopter dropped rapidly. I thought Jennifer was going to cut my leg off when she grabbed it as hard as she did to steady herself.

This pleasant place is the Turtle Bay resort, where the helicopter took off from. 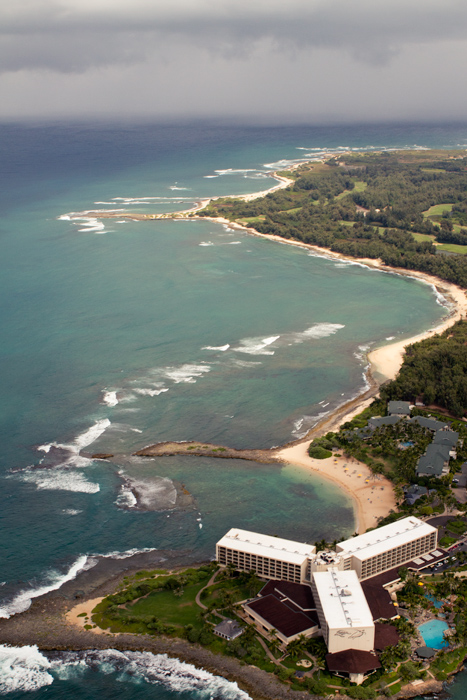 This is called the Stairway to Heaven. It’s really hard to convey how steep and high this staircase is.  Note the clouds. It’s illegal to hike it, so anyone doing so has dodged the security guard that works at the bottom. 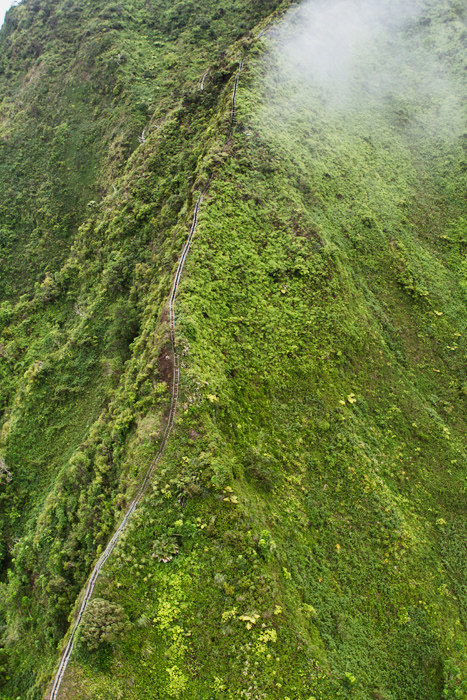 Here’s an overhead of the USS Arizona memorial in Pearl Harbor.  Here’s another, much larger photo of the site (click the photo to close it).  Something like 900 fallen sailors remain entombed within her. 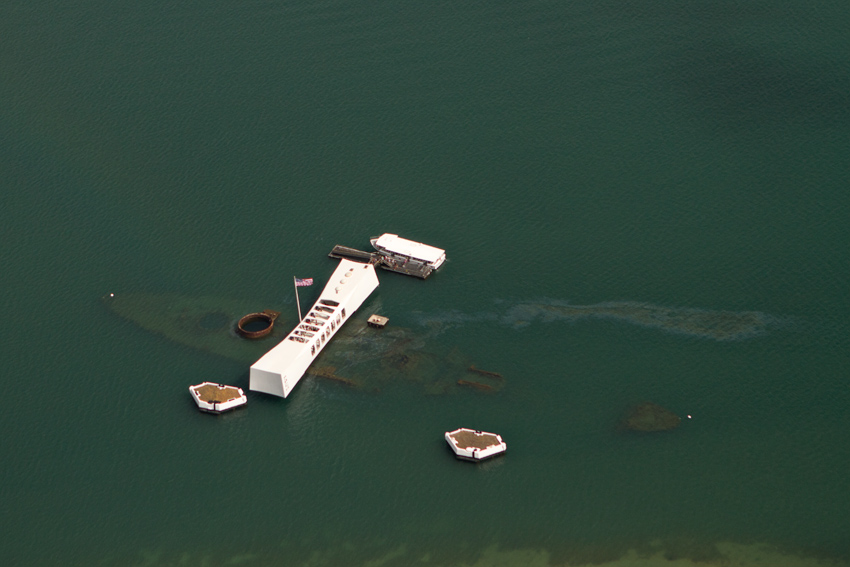 I shot this place, Sharks Cove, almost every day. It’s about a quarter-mile from Jen’s house and has some decent little food trucks that hang out by it. This is a great spot to go snorkeling or to take the kids for tide pool fun. 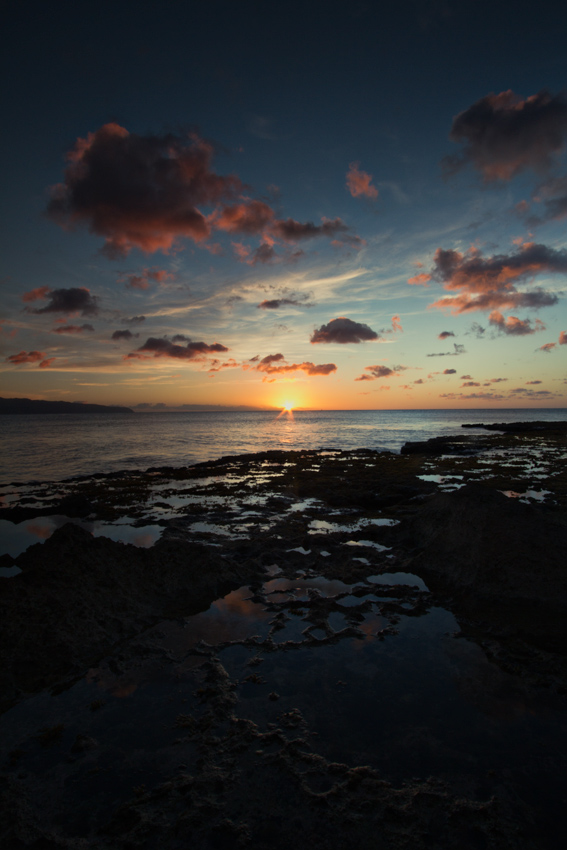 This is Emily’s second dog, a sweet little female puppy who was constantly under foot. I think she may have been trying to kill me, now that I think about it. 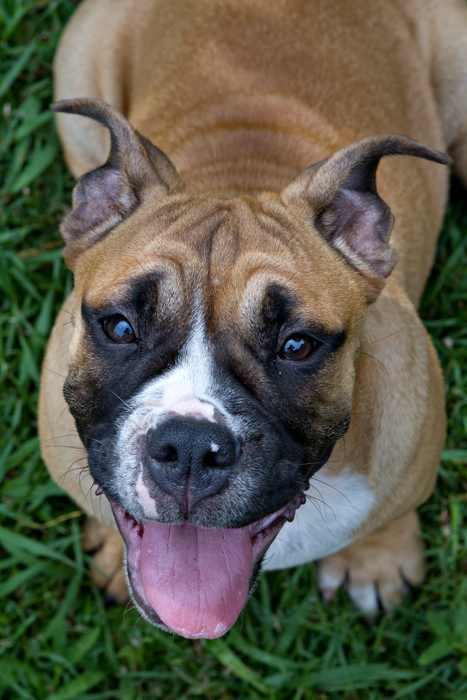 Two more of the keiki: 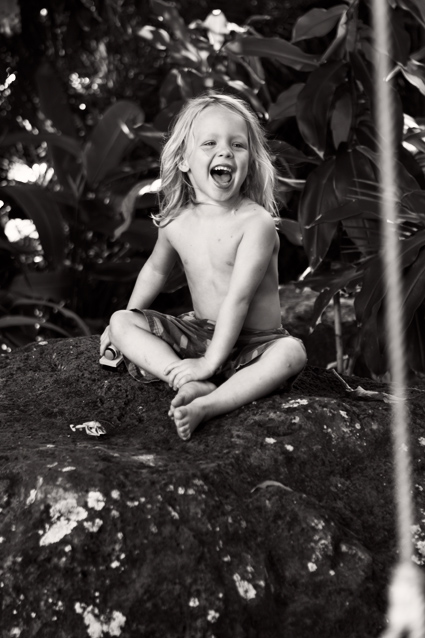 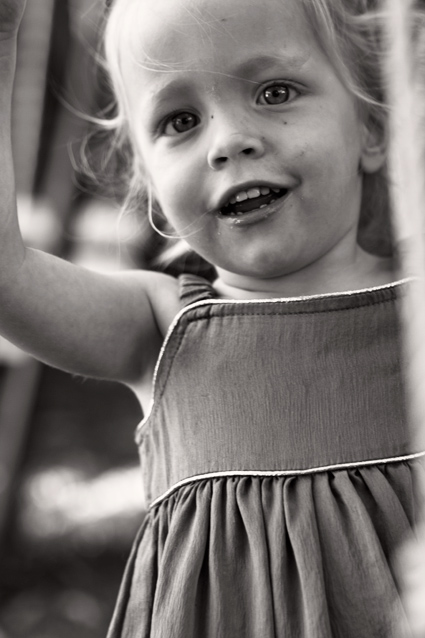 On one of the nights Jennifer, Jessica, and I drove down to the Barbers Point lighthouse. This idealic scene is a bit misleading; literally 8 feet to my right is a big luau restaurant/show, and the whole area is surrounded by a heavy industrial park that stinks of oil. The sunset was incredible, so I do encourage you to head down there. Just lock your car when you do. 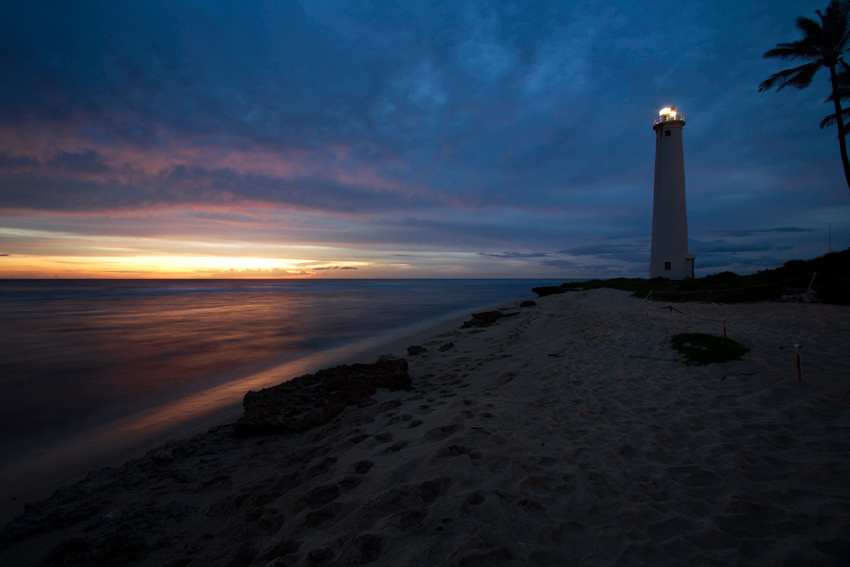 This is a photo taken along the path to Waimea Falls in the botanical gardens. 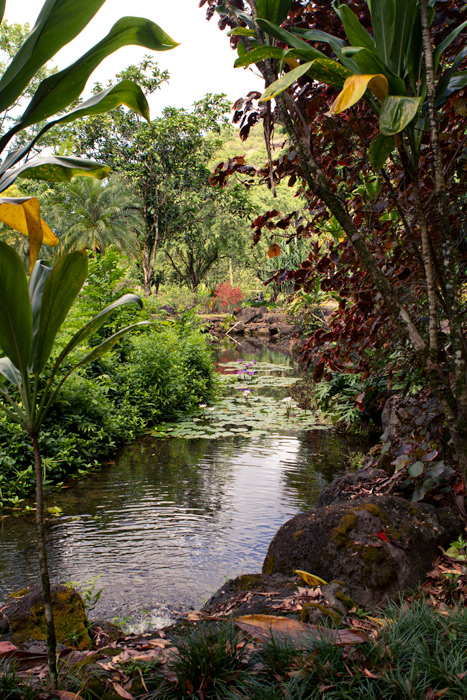 On Friday I went to Waikiki to do some diving with Drew Wheeler, a very nice and capable dive leader at Surf n Sea in Haleiwa Town. Both of us (and his friend Bret) are trained in shipwreck penetration, so we planned to enter and explore some sunken ships. Unfortunately, conditions proved a bit too dicey to do the route we planned on during the first dive, but we were still able to explore the ship. Drew was kind enough to send me some photos of myself outside and inside the YO 257 and San Pedro wrecks. If you’re in Hawaii and want to dive, make sure to look him up. Oh, and check out his website for more cool underwater videos and images. 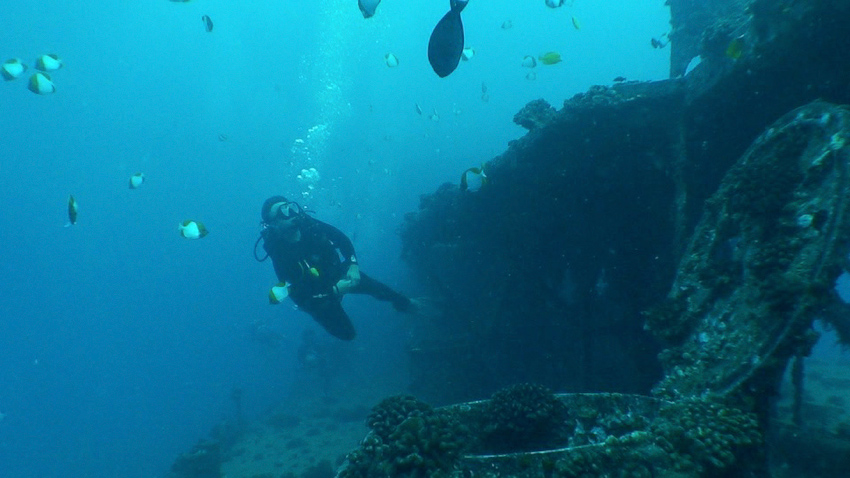 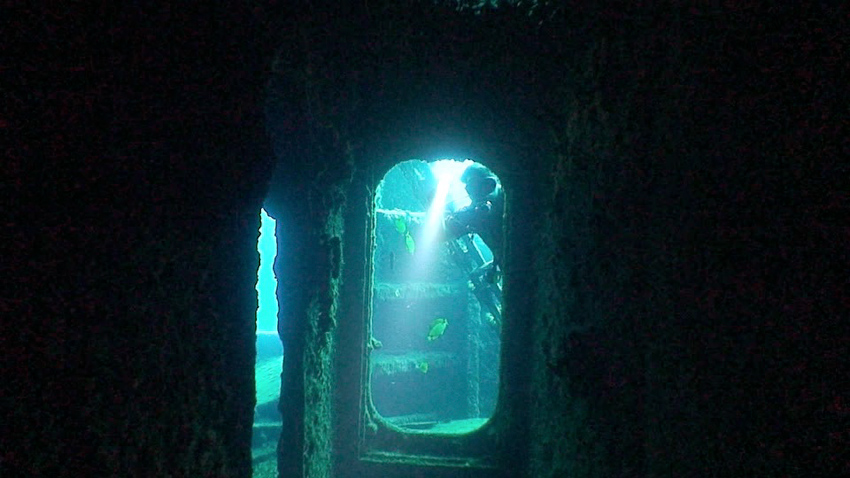 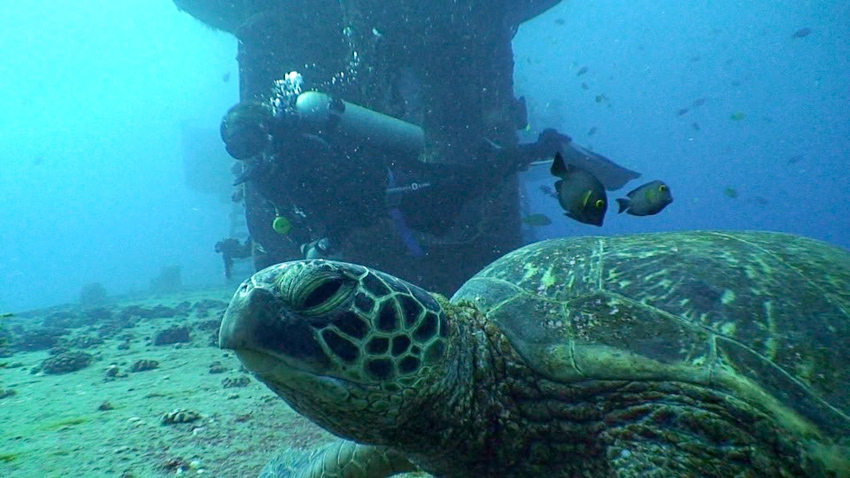 We hung out at Waimea Bay for a bit on Sunday. In addition to jumping off the big southern rock ourselves, I had a great time taking photos of others doing the same. This is our friend Susanna doing a flawless back flip, although it looks as though she might  be getting abducted by an alien spaceship. 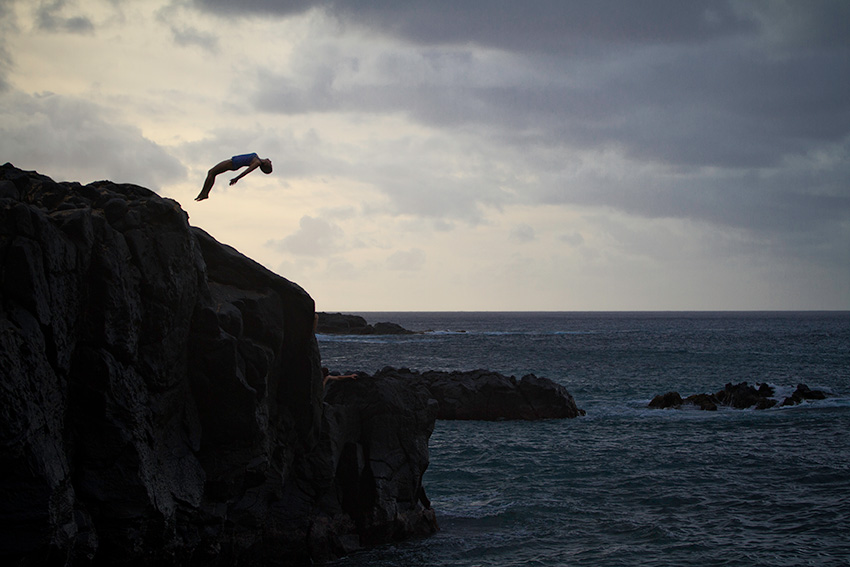 Baby balancing, a close cousin of cat juggling, is all the rage on the north shore. 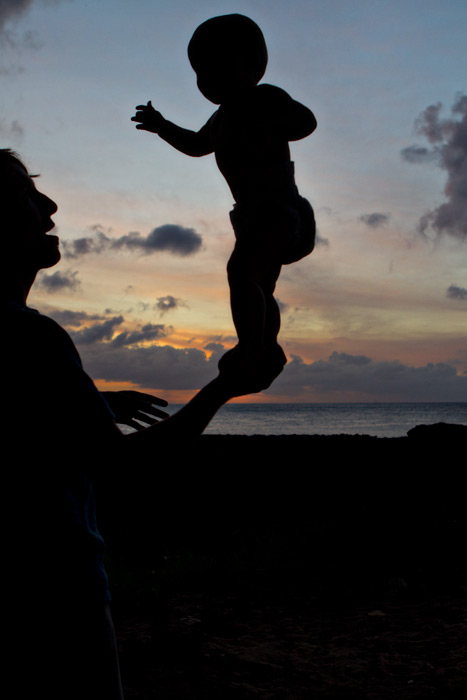 Although I took a lot more photos, I’ll leave you with this one of Susanna and Rusty’s beautiful daughter Hanalei having a sunset swing. As one of the last photos I took of the trip, it’s also one of my favorites. How would you like to spend life doing this every day? :) 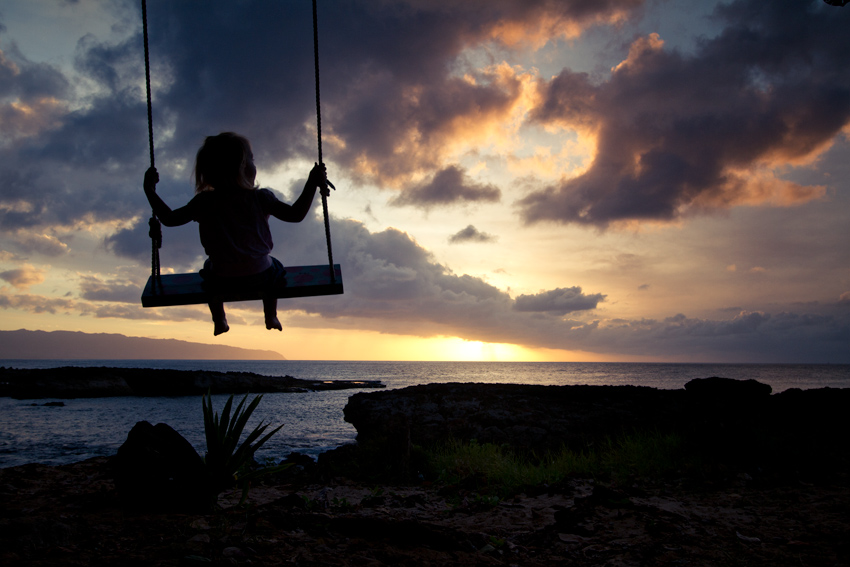 6 Responses to Gettin’ High (and Low) in Hawaii