A Floating Ghost in the Forest

By Jake Reinig on November 24, 2015 in Ruins/Abandoned, Seascapes

Apparently, the shipwreck I was on was private property. The man who told me this was agitated, on an ATV, and on the other side of the river. He wasn’t the first agitated man I’d run across on abandoned/forgotten property, so I erred on the side of caution and told him I was leaving.

He didn’t believe me I guess.

A few months ago I was on a business trip and had some time to kill. As I usually do, I went in search of abandoned places to photograph. I came across this ghost ship while doing research and decided to go looking for it. Since the shipwreck is apparently private property I’m not going to give out any additional information on its location, but I will say that in this particular state the mud is like molasses and mosquitoes and horses are in about equal supply. This river, a tributary of a much larger one nearby, is also pretty popular with kayakers apparently.

After a sweaty walk through dense forest and mud that was more like quick sand, I found her. As if the walk wasn’t bad enough, she was set slightly out into the river so I was going to have to get a little wet and super muddy to get aboard. Great.

Unfortunately, she was listing a little to starboard, so that made the climb interesting. Double unfortunately, the river looked like something evil and gigantic was lurking in it (and muddy! did I already say that?), so I was desperately hoping I didn’t fall. I quietly checked in with the patron saint of shipwrecks and climbed aboard.

Besides the first shipwreck forest I’ve ever seen, the vessel had several large holes in the deck, some of which were hidden. Falling through one would likely drown you. If you didn’t drown and didn’t have a friend to help you out, you would no doubt end up with a life-long fear of rivers: the hold was full of dark water, tree branches, and skeletons of long submerged equipment. In retrospect I probably shouldn’t have been there alone, but I’m pretty much Indiana Jones so it was ok. (I’ll give you a moment here to roll your eyes.)

The boat was pretty substantial in size, so photographing it took a while. After about 30 minutes I heard a noise in the distance which soon became a noise in the nearby. A man pulled up, killed his engine, and told me in no uncertain terms to leave (I’ve learned from experience that it’s usually best not to hide, which is how he found me). Even though I had intentionally parked far up river away from any houses and hiked in to avoid a problem just like this, one had found me.

I packed up my kit and rappelled down the side of the ship, almost losing a shoe to the sucking mud. After a few minutes of hiking it became apparent that he was crossing the river and headed my direction, so I stayed close to the water in thicker bush and stayed out of sight. (On the other hand, I’ve learned that sometimes it is in fact better to hide.) After he passed me I hustled out a little faster, positively coated the inside of my rental car with mud, and made my way out of the forest.

Below are some of the photos I took. Maybe in a future post I’ll put up a few more.

This was my view from the right side of the river as I approached. Because of how dense the forest is, the shipwreck just sort of appears out of nowhere. 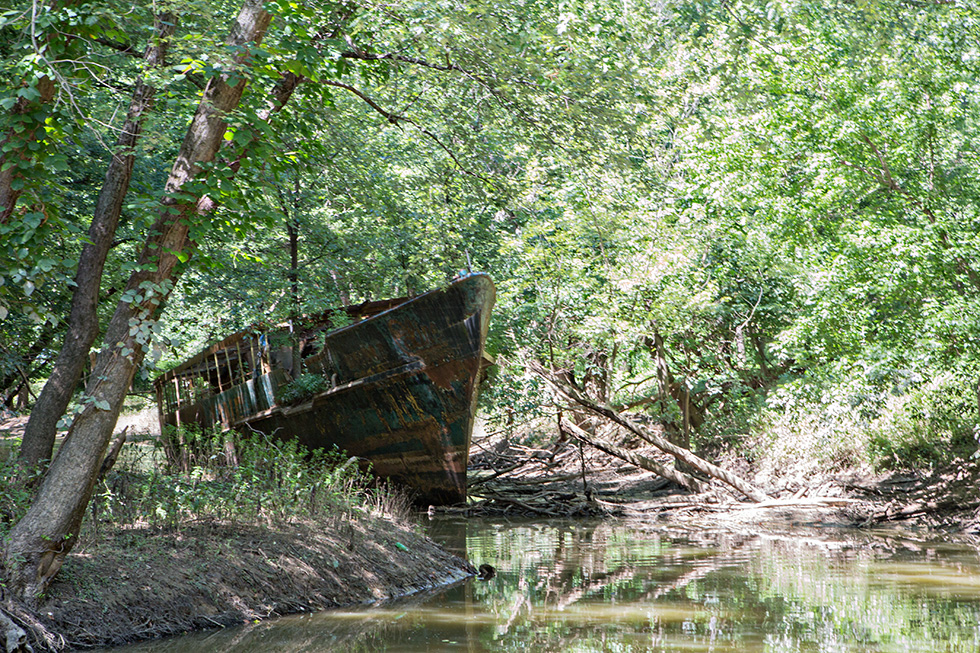 One of the holes in the deck. Note the submerged equipment inside just below the water. 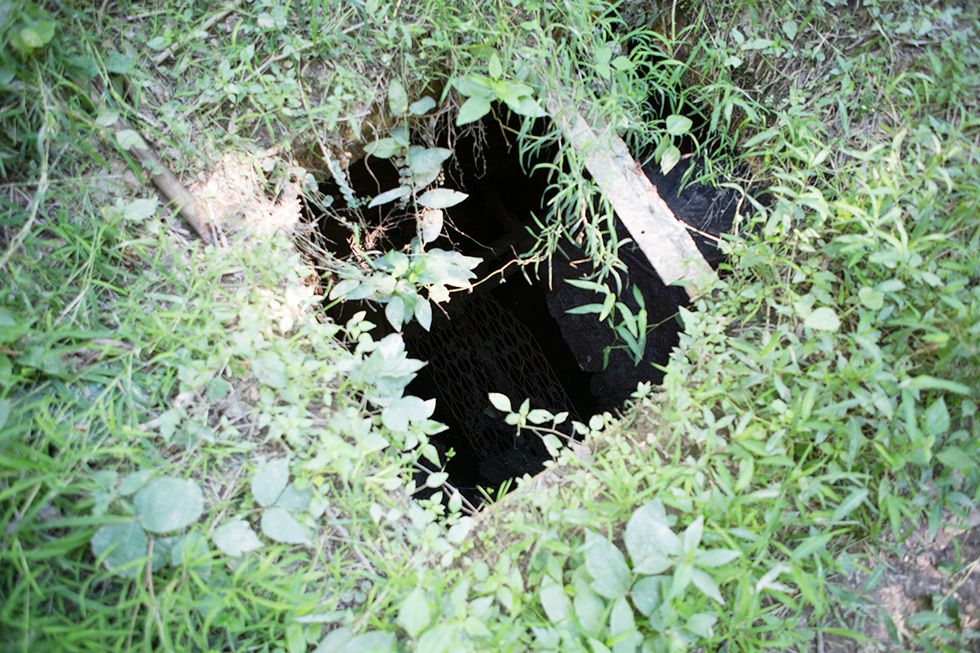 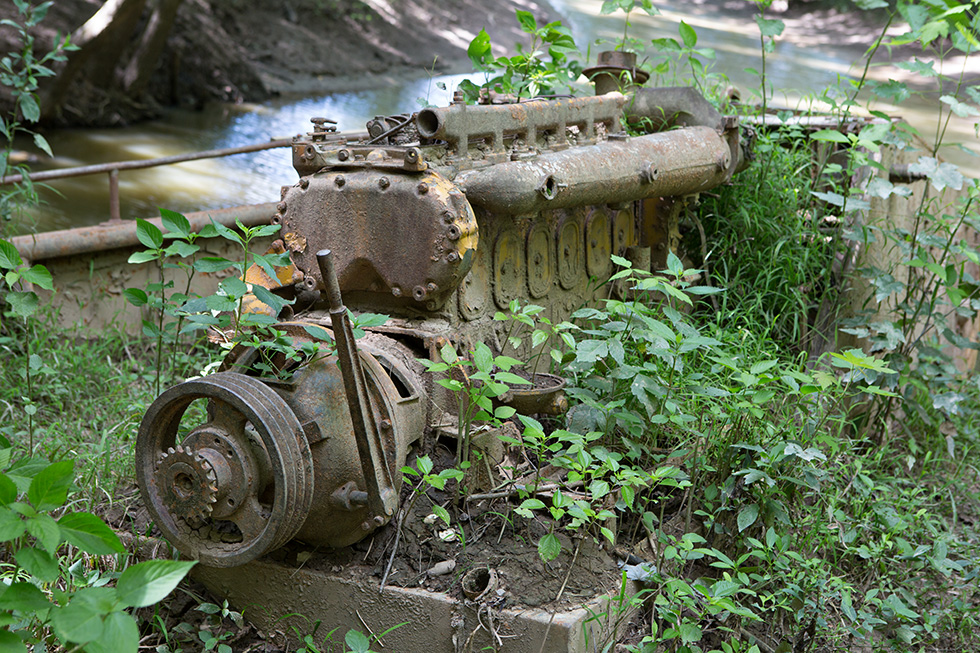 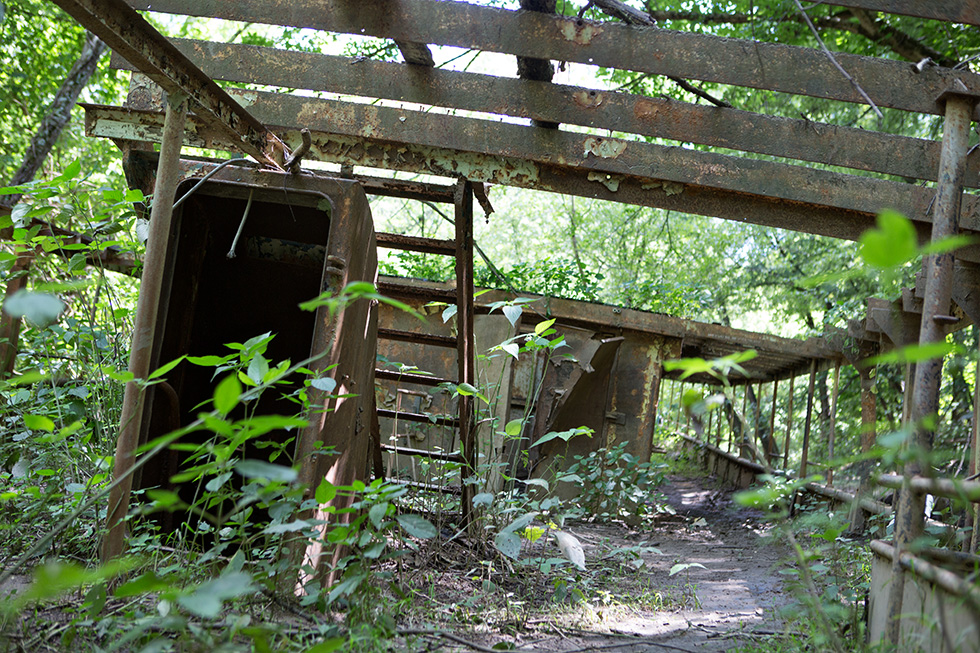 Another view of the inside, including branches that would make for a very bad day if you fell in. 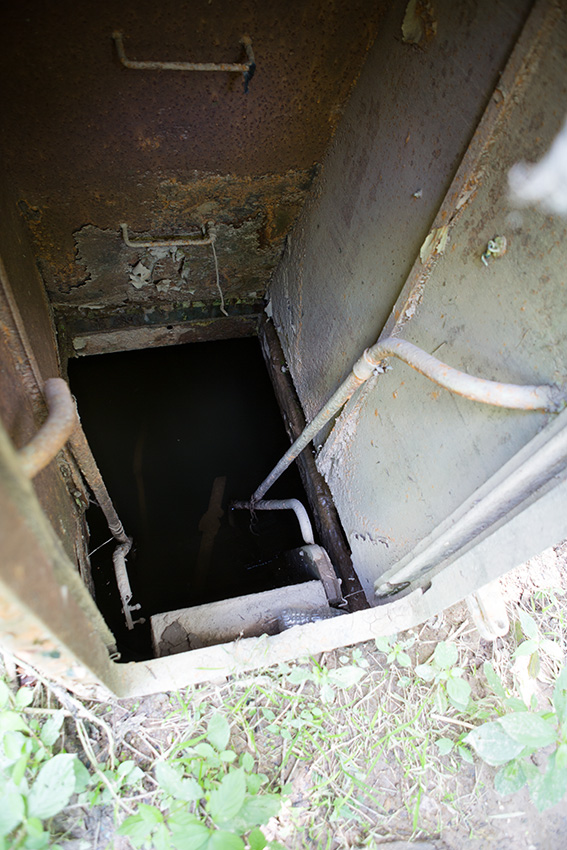 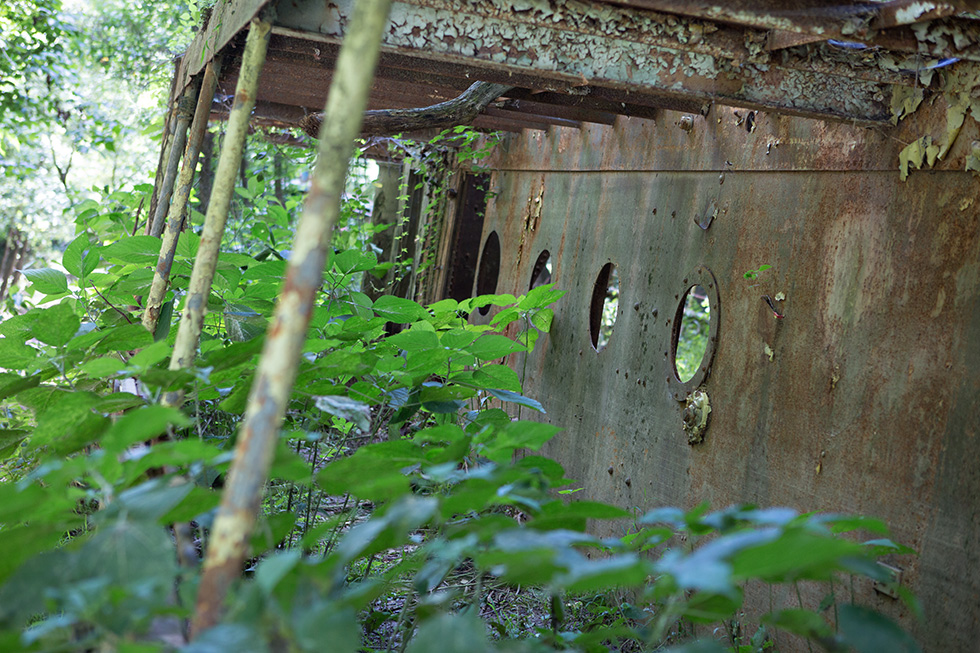 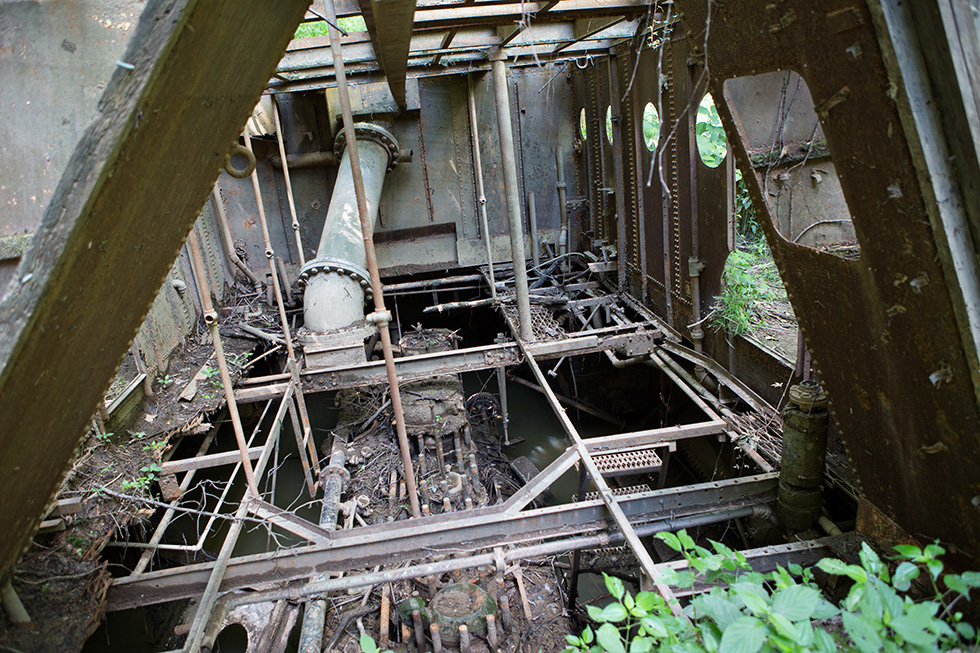 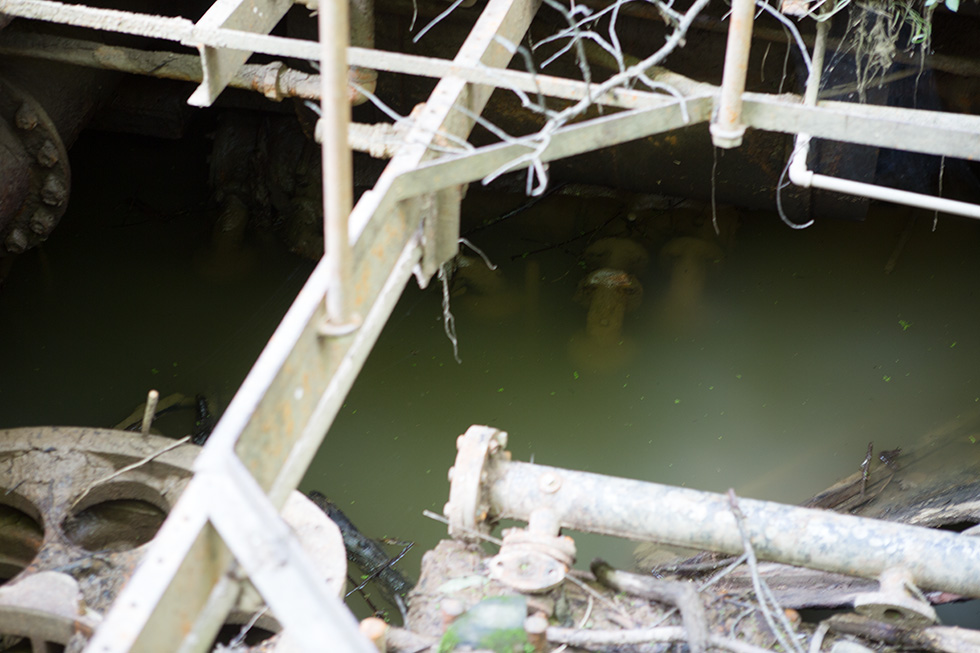 Since I almost never get to an abandoned spot before other people have, there’s inevitably graffiti on them (people suck). Luckily this wreck didn’t have much of it, and what was there was kind of interesting, like this piece. 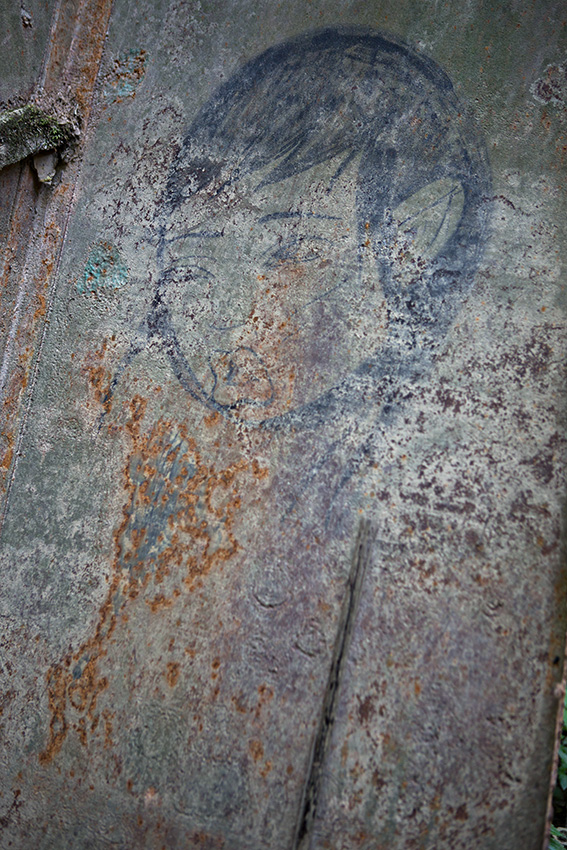 A view looking towards the bow; note the trees. 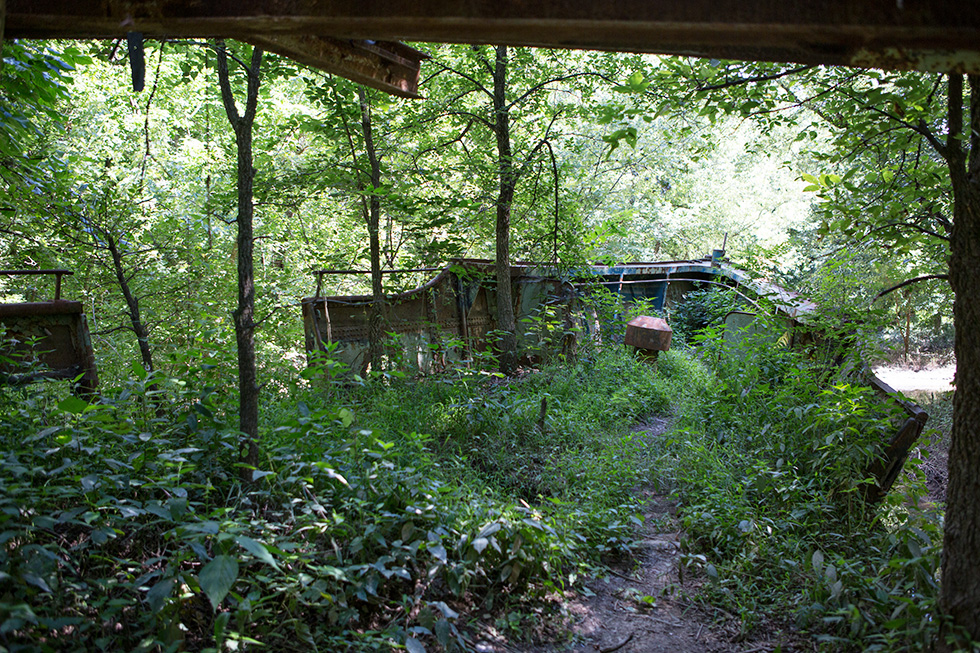 Because I’m dumb, I thought it would be a good idea to stand up on the narrow edge of the bow and take a photo of the river. I’m pretty sure it was full of concentrated evil. 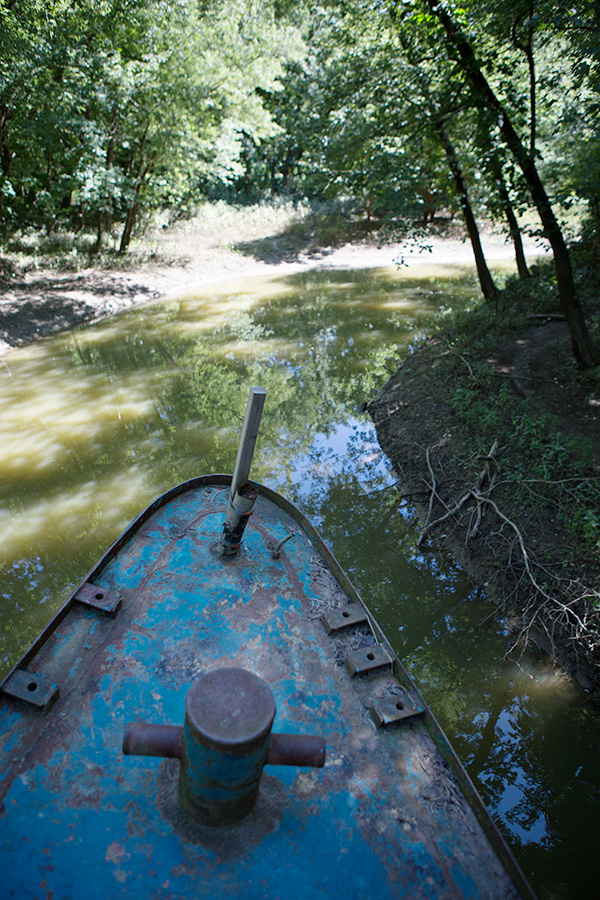 And here’s my opposite view, showing how tall the trees on the deck were. 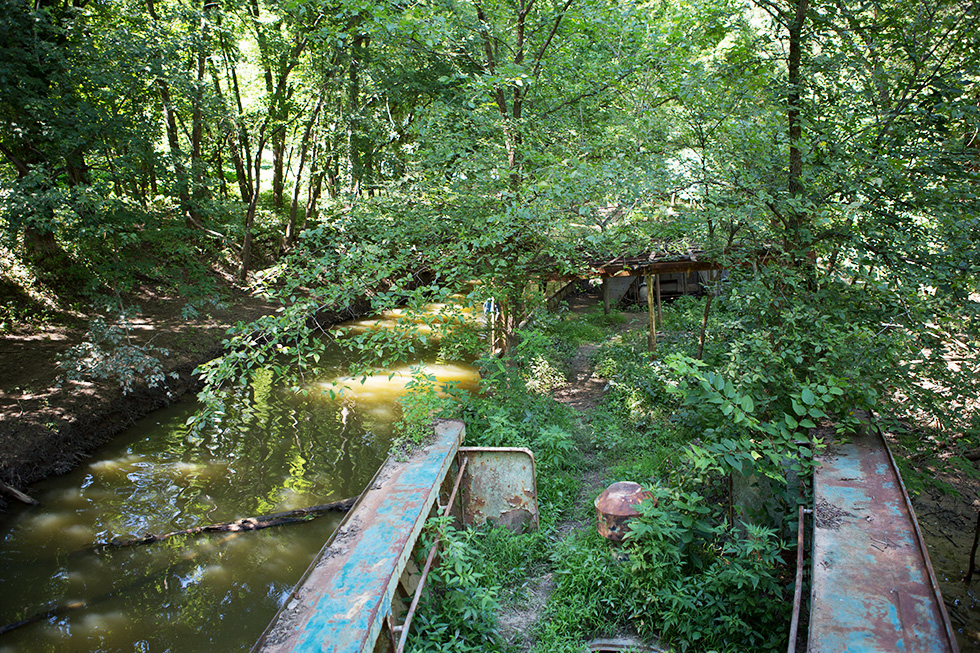 This next photo was the last one I took after I abandoned ship, and will be the last one I bore you with. Thanks as always for visiting my littler corner of the Internet. Check back soon for more updates!

2 Responses to A Floating Ghost in the Forest