I’m currently engaged in a project at my day job that is one of the most challenging things I’ve ever worked on. If it doesn’t kill me, there’s a good chance I might collapse into a whimpering heap, appearing only occasionally to buy sour candy and look handsome in a tuxedo.

Since I probably won’t be able to travel until March, and since I just got a new camera, I figured I should get one last photo road trip (or phroad trip, as the scientists call them) under my belt. The new camera is significantly more light-sensitive than my previous body, so I decided to head out to the Trona Pinnacles to get some shots of the Milky Way. Turns out, I’m really bad at that, but more on that in a minute.

Regular readers know that I’m crazy for abandoned places, so in my research on the route to Trona I found an abandoned military complex to visit. Unfortunately, the place had been severely worked over by idiots prior to my arrival, so what could have been a cool time capsule was instead a post-apocalyptic wasteland.

That said, some of it was kinda cool and/or funny, like this trailer blocking one of the roads into the town. Someone loves their zombie movies. 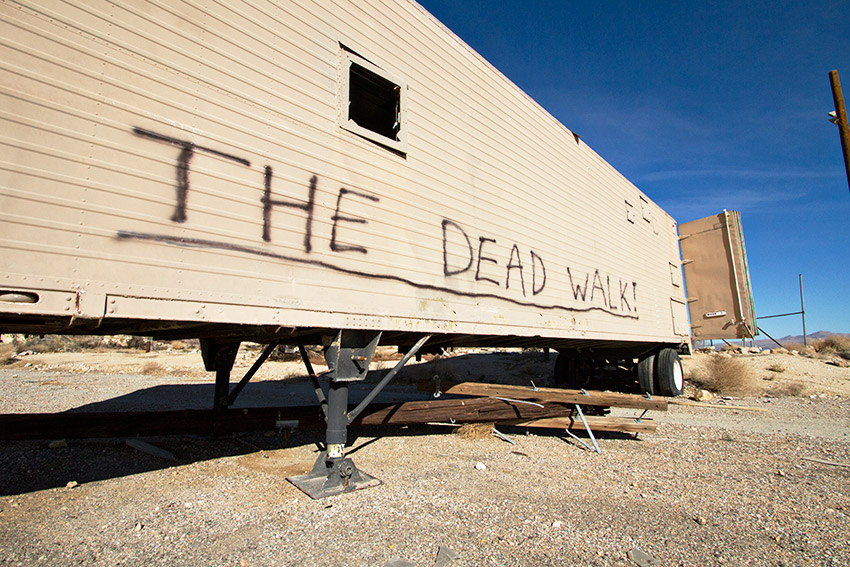 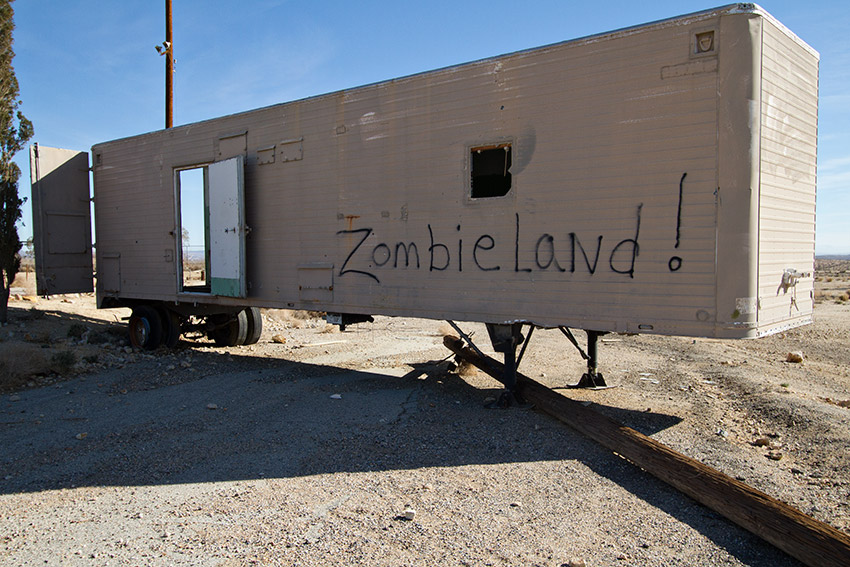 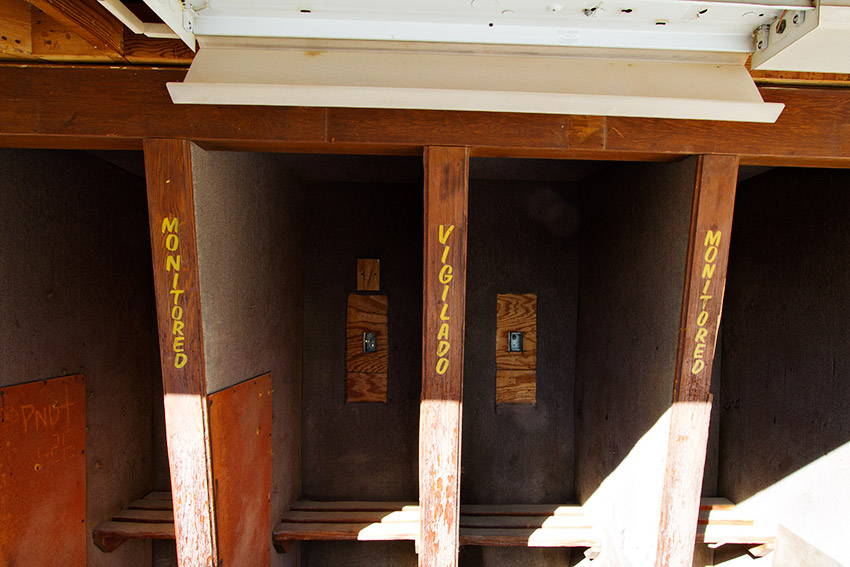 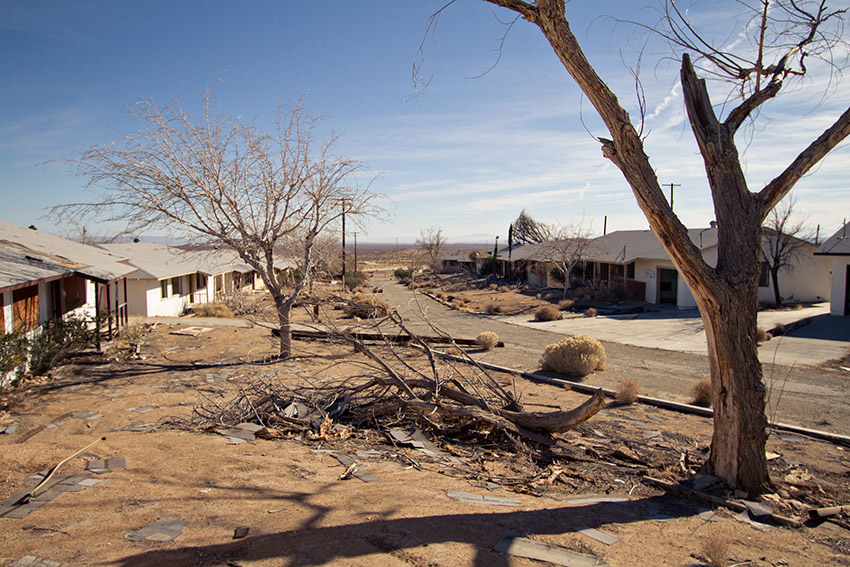 I’ve been to some pretty crazy places, but I still get nervous walking through dark hallways, even during the day. At times I feel like I’m one meth head away from a shiv to the kidney, so once in a great while I might have a weapon on me… 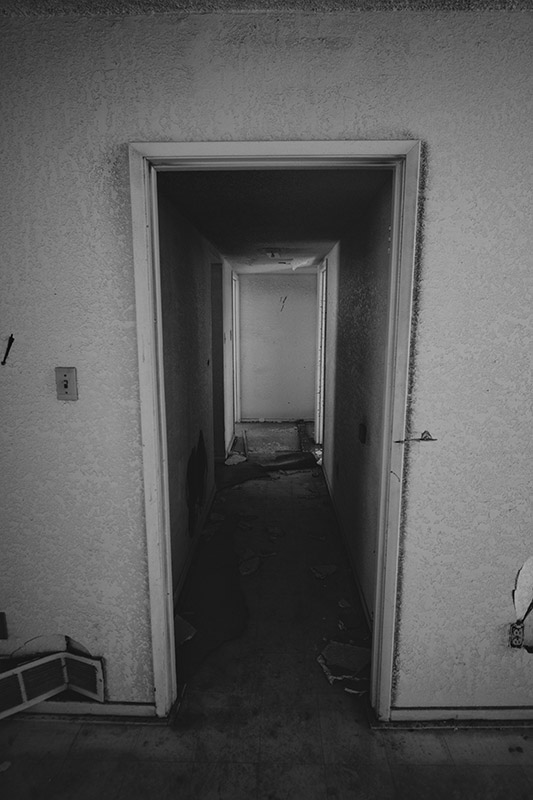 …particularly when there are zombies lurking about. 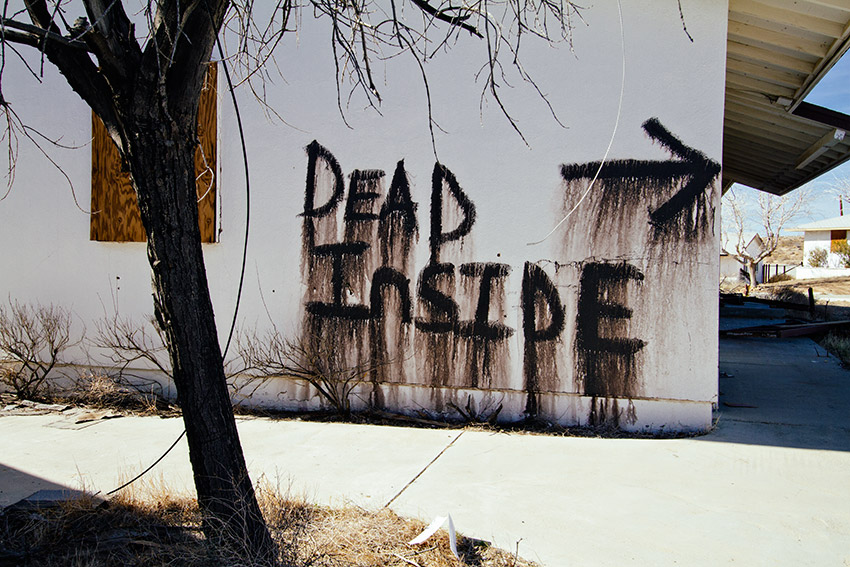 This is why we can’t have nice things. Not only are there tire tracks on the tile, but notice all of the holes smashed into the walls. 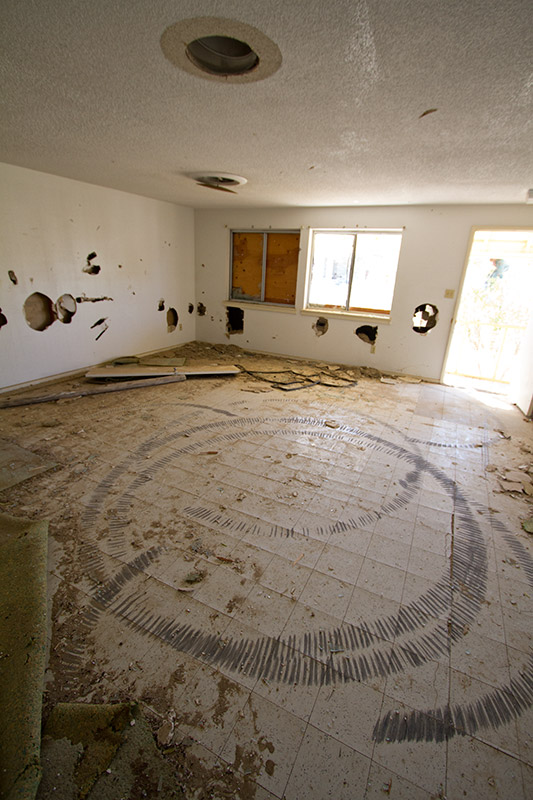 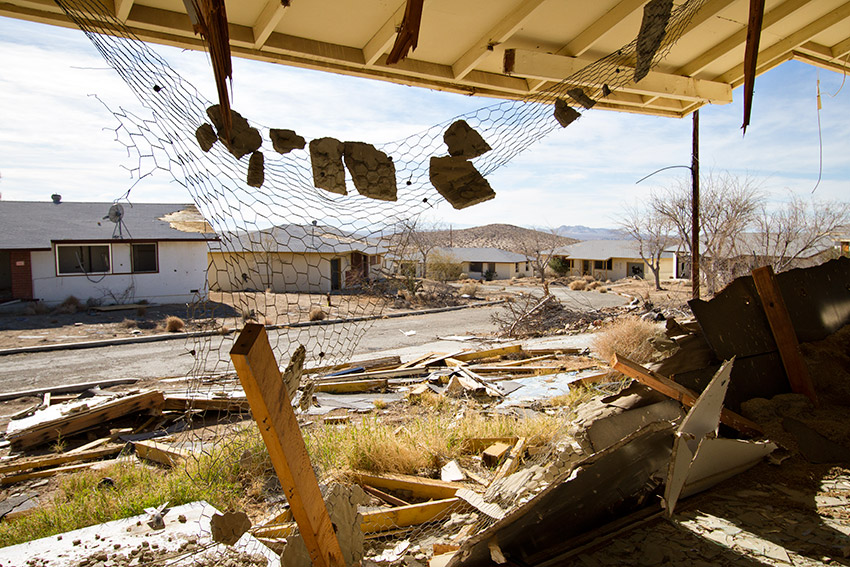 The best selfie I’ve ever taken. 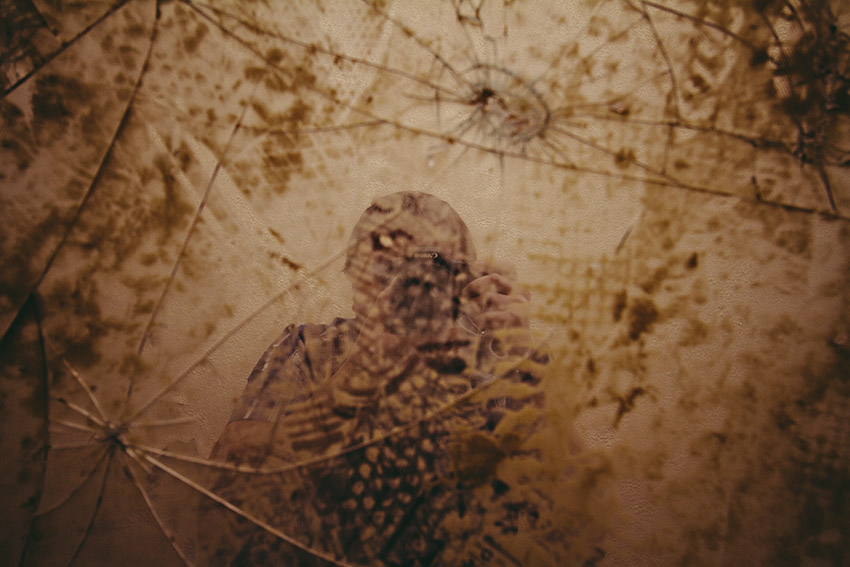 I’m no expert, but I think fire alarm quality is reduced by bird nests built inside of them. 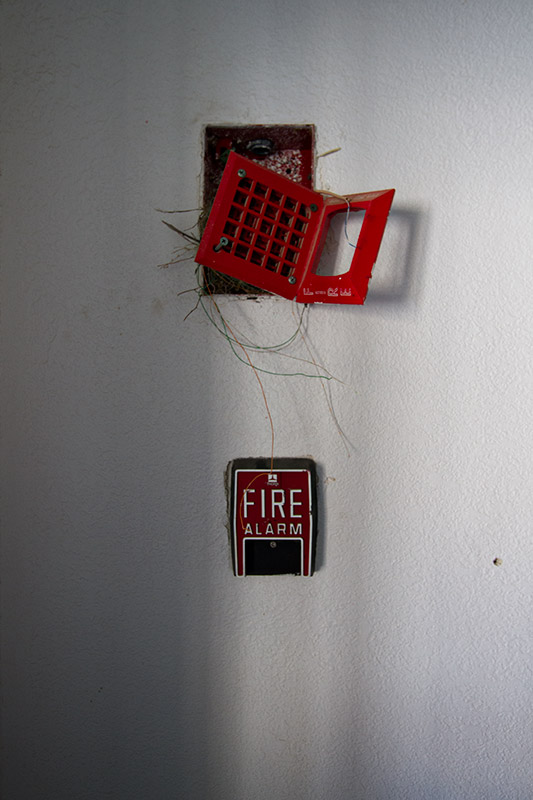 One of the things I’m always amazed at when I visit abandoned places is how shot up they are. Bullet holes are everywhere, proving that many gun owners are not at all responsible individuals. In the event that you had to be somewhere when an idiot started firing into a building, this is actually a good spot to be: that door, as the entrance to a justice center, is fairly bullet proof. 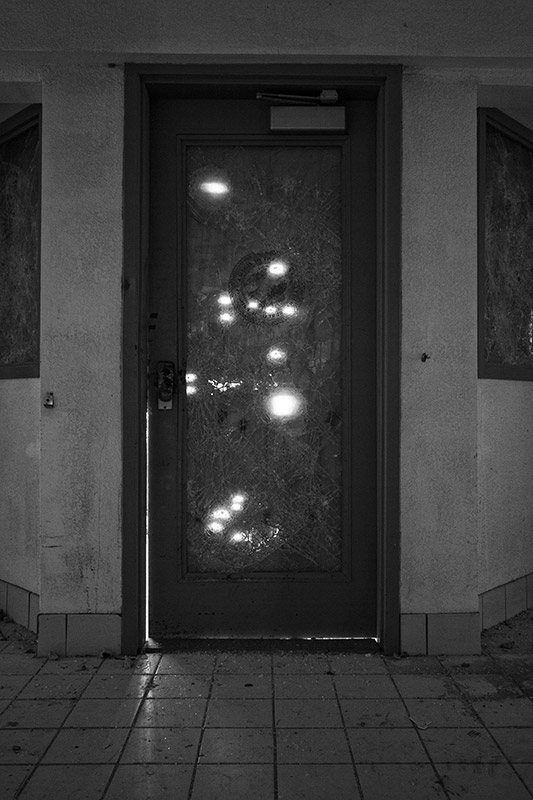 It took a beating, but very little of the glass was actually punctured all the way through. 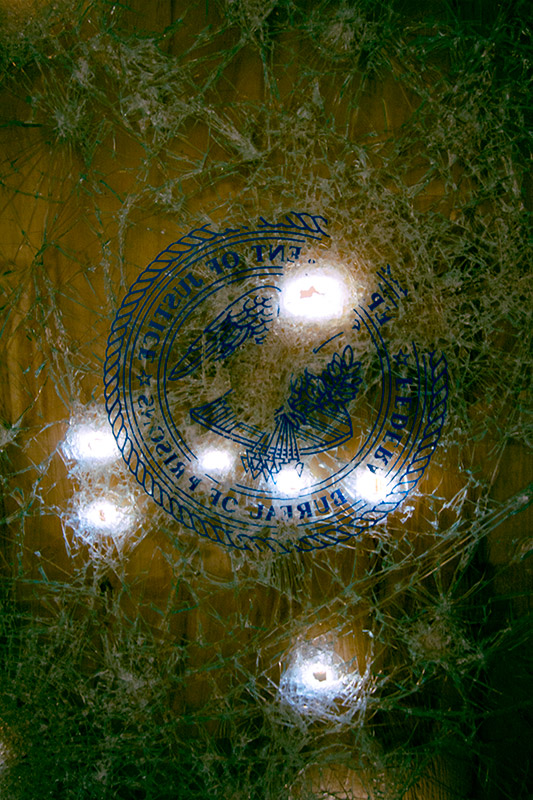 Continuing up the road the traveler goes through Johannesburg, California, home to one of the the loneliest playgrounds in the world. 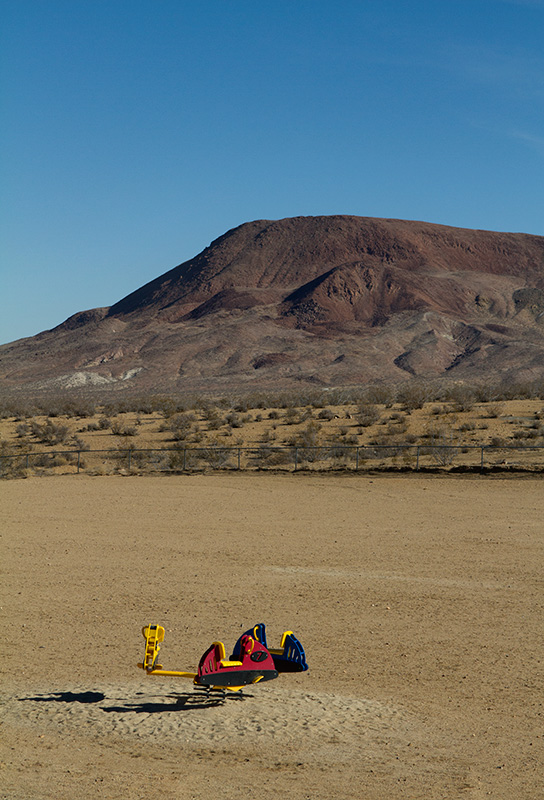 The Trona Pinnacles are the really interesting remnants of springs that bubbled up from the bottom of an ancient lake that has since disappeared. Actually, I say interesting, but they’re likely super boring unless you’re a photographer or a geologist. Visit once for sure, but you probably don’t need too long if you’re not there to take pictures.

This shot was taken from several miles away, so you can see how big the tufa formations are. In the foreground are some semi-abandoned train cars from the semi-abandoned “city” called Trona. (Fun fact: the Trona high school football team has one of the only all-dirt football fields in the world.) 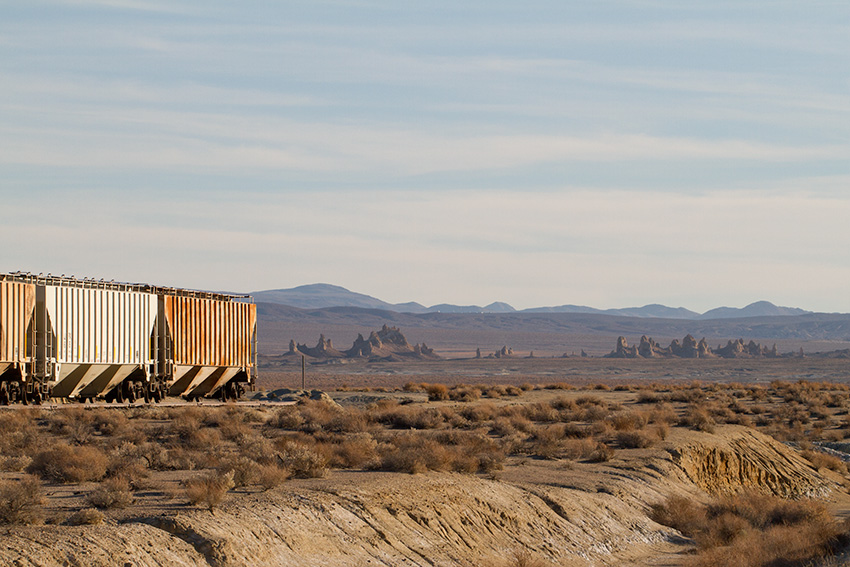 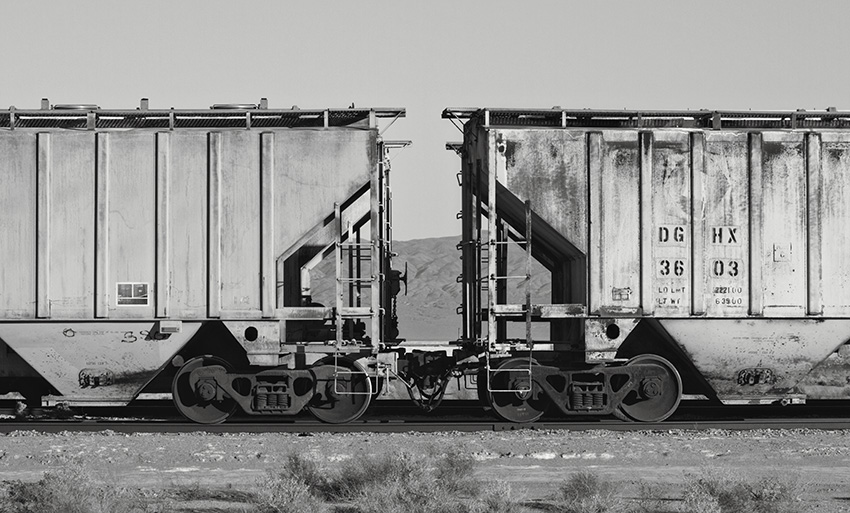 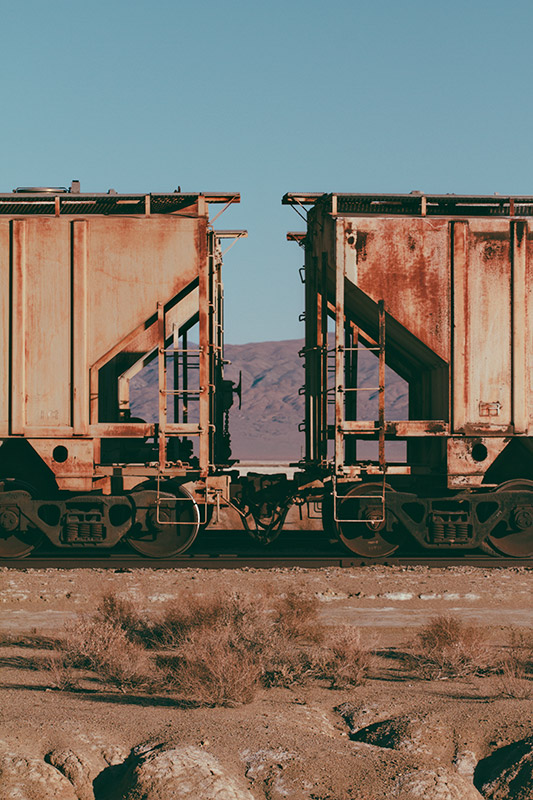 Note the cars in this shot. They really show how big some of these things are. 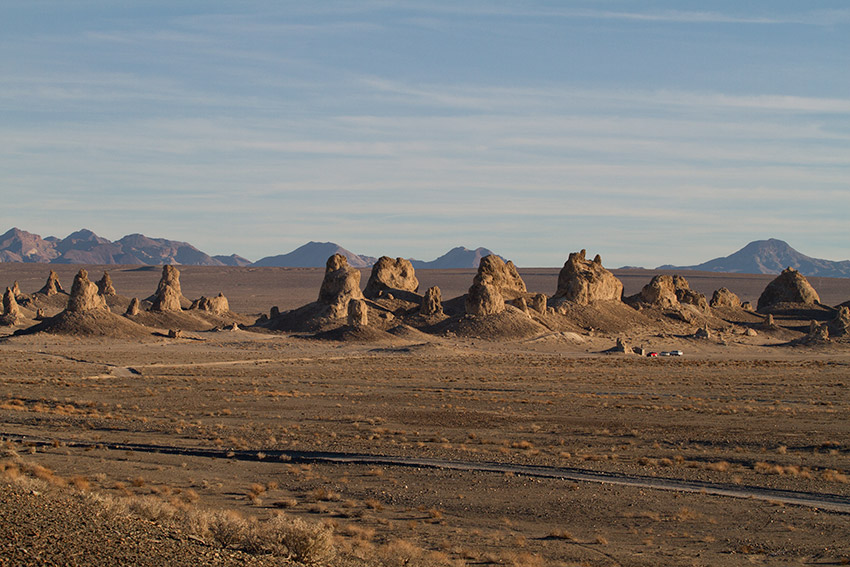 As the sun sets, some of the rocks and hills take on really interesting colors. 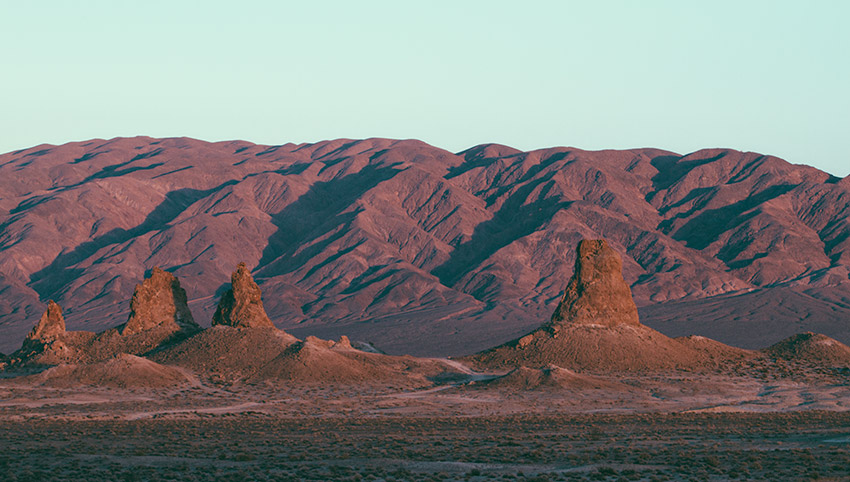 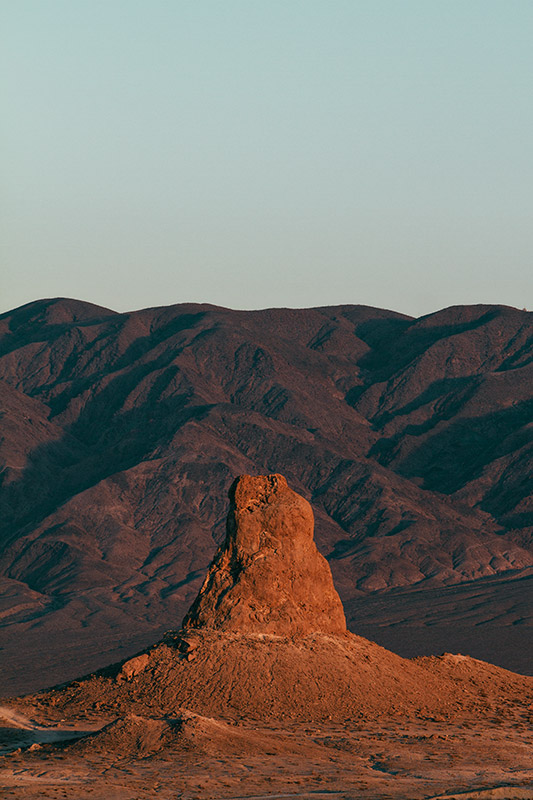 Returning back to my earlier statement about being bad at Milky Way photography, I’ll complete the story: my new camera is pretty light sensitive compared to what I’m used to, so I figured the Milky Way would practically photograph itself. Turns out there’s a lot more to it, and I did a pretty bad job of the photos.  Basically, I let in too many stars I didn’t want, and didn’t bring out enough of the galaxy that I did want.  I also didn’t do enough homework to know that by far the best time to photograph the MW is around summer, when the galactic core is visible. I’m posting these photos as evidence that I still have a tremendous amount to learn. Hopefully in a few months I’ll have the right conditions to capture some truly awesome photos. 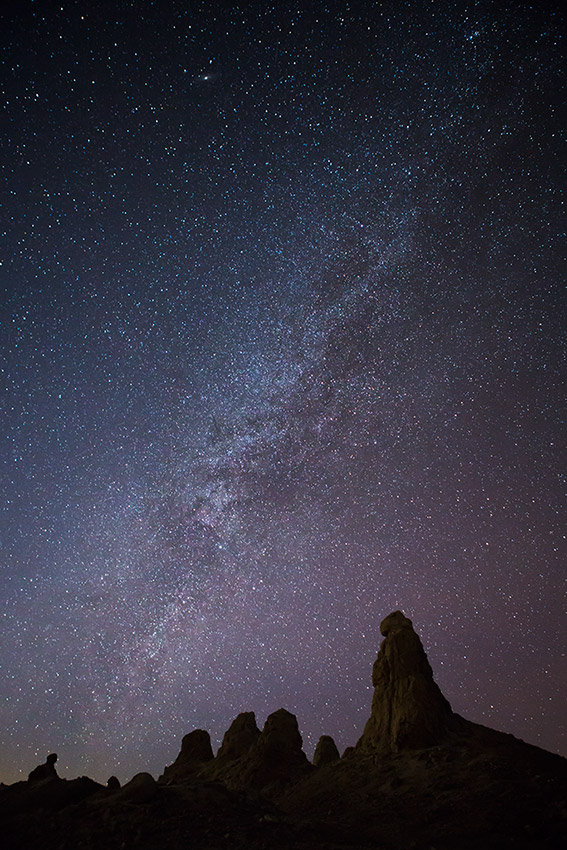 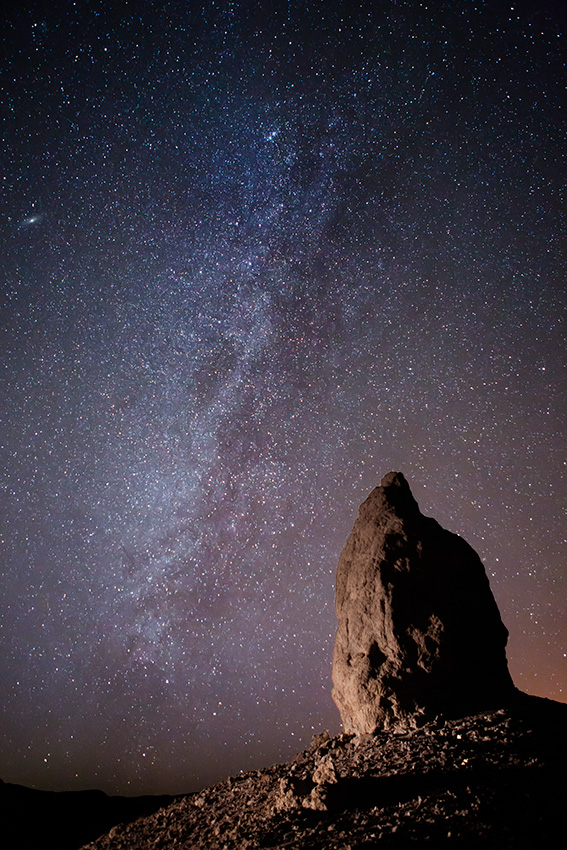 So, about the Japanese tourist I almost hit with my truck: the pinnacles are in the middle of nowhere, and once the moon sets the valley they’re in becomes pitch black. The main body of pinnacles has a confusing series of roads that runs through them, and I was driving slowly in the inky darkness trying not to get lost. I drove over a rise in the road, and there, smack dab in the middle of this tiny little trail is a man with his tripod.  He was very sorry that he was in the way, but asked very earnestly if I wouldn’t mind driving my truck into the rocks so that he wouldn’t have to move his camera, which was likely in the middle of a long exposure. A fellow photographer, I obliged him, but was even more annoyed when I got back on the road to find his car (with his friends inside) turned completely across the road, blocking it again. At least I had the satisfaction of knowing that I probably ruined his photo (insert evil laugh).

Having established that I’m a jerk, I’ll close with this next photo. While waiting in my nice warm truck for the moon to set (and the sky to darken), I put my old camera out in the cold to capture a four hour time-lapse of it going down. 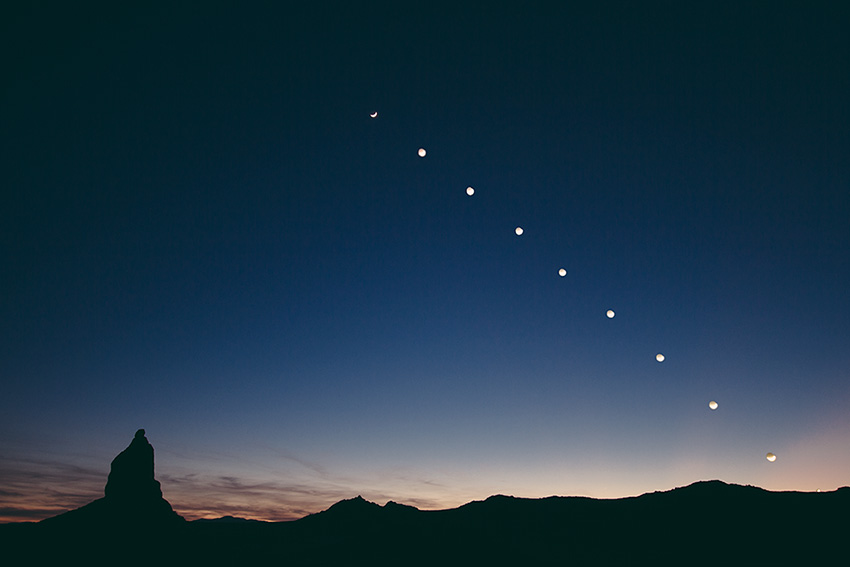 Stay tuned for more (and hopefully better) photos from Trona in the future.

Cowboys and Indians (and Miners) in Joshua Tree
Playing with Trains: Ow, My Eyes Edition