Making Appleade -or- How I Ruined New York City

By Jake Reinig on June 26, 2010 in Architecture/Man-made, Photos

Landing in New York City recently, I had high hopes for my photography. As one of the most dynamic cities in the world with incredible architecture and people, I smugly thought to myself, how hard can it be? As Moltke the Elder once said, “no plan survives first contact with the enemy.” And boy, was New York my enemy.

Mind you, New York didn’t try to kill me or anything. Rather, it was one of the best trips of my life. It’s just that the city is so overwhelming. It’s tall (try catching a sunset), busy, loud, and just plain awesome. As probably the most photographed city in history, how could I possibly do anything to set myself apart?

I spent 5 days walking around pointing my camera at stuff only to realize that my photo was lackluster, or that someone famous had shot it better. I kept trying to photograph all the skyscrapers, but everything looked so…normal…when caught by my lens. Oh look, Jake took another photo of a tall building.

And so, in the end, I’m admitting defeat. New York beat me. I don’t think my photos are bad, but where I imagined leaving as the conquering hero–having slain the beast with my mad skillz–I instead left humbled and determined.  I may not have made appleade when given the Big Apple, but I’ll be back.

(Note: there are lots of big photos in this post, so you’ll need to give it a minute to load everything.) 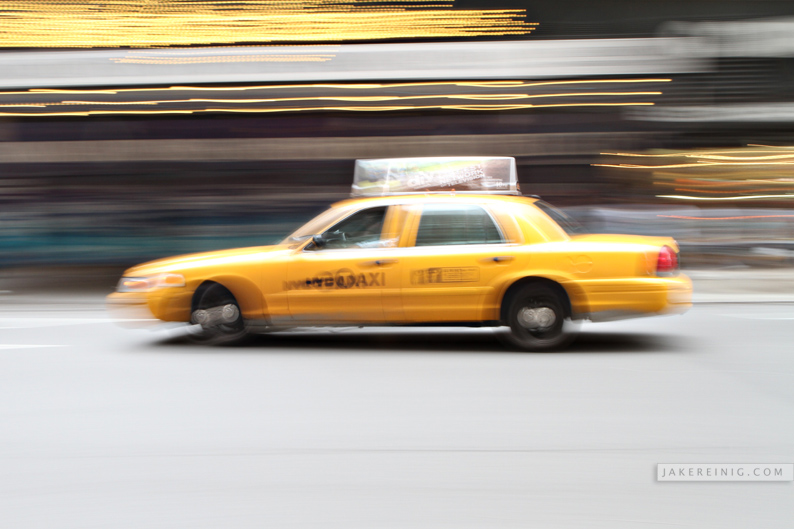 Cabs are everywhere in the city, so I took some time trying to get panning shots of them zooming around. I spent a few minutes teaching my friend Aislinn how to do this; as you can see from this photo she took, she picked it up pretty quickly. 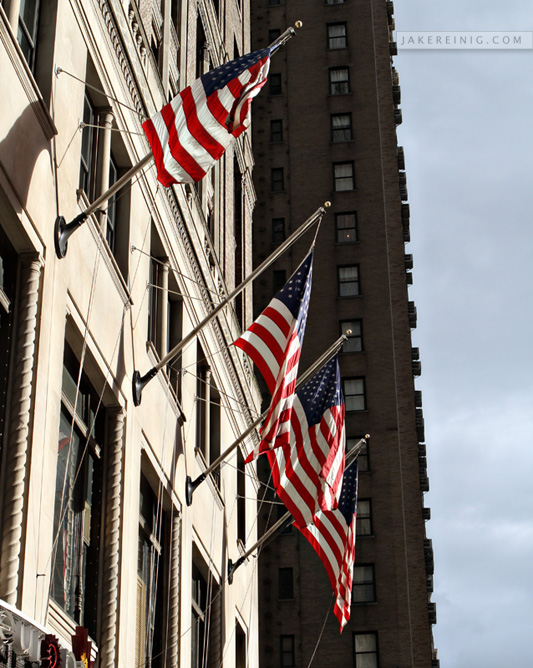 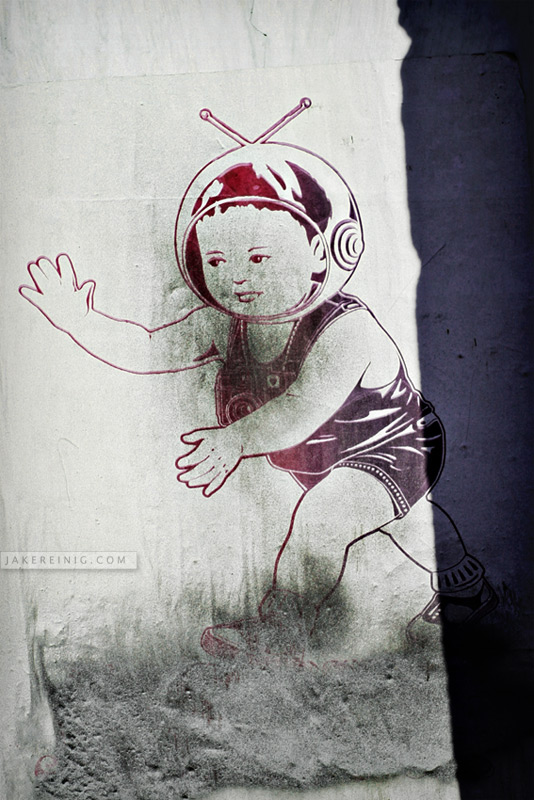 As we ventured out into more colorful parts of the city, graffiti and wall art became more common. I don’t know why, but I’ve always been fascinated by the anonymous artists who design cool stuff like this and then paper it up on random walls and overpasses. I found this intrepid explorer near Greenwich Village. 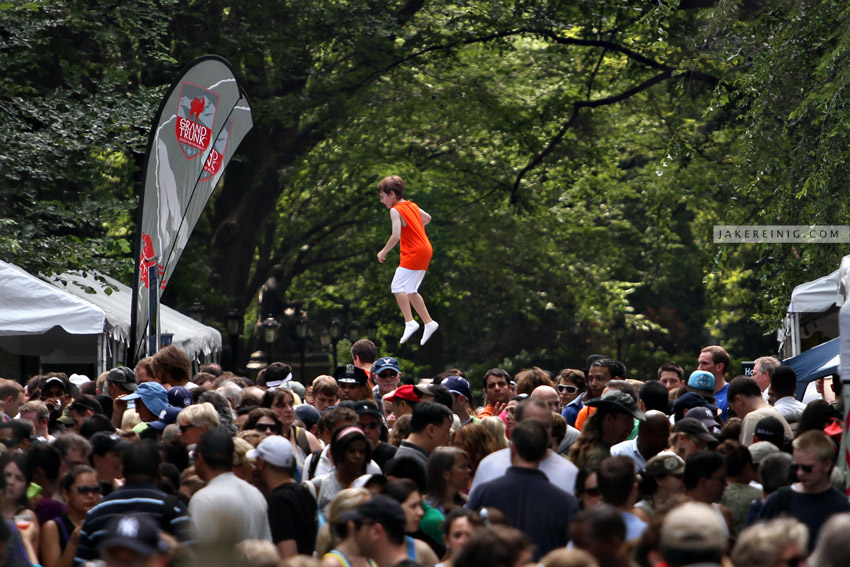 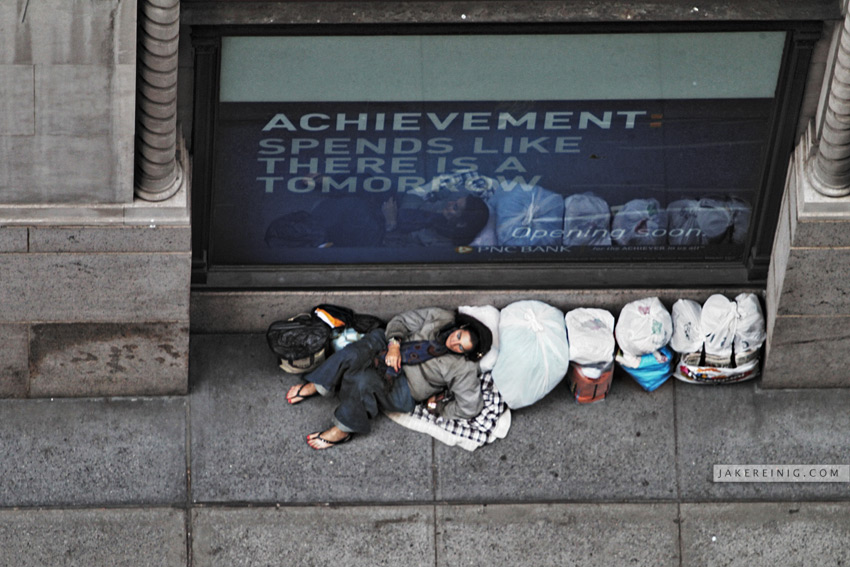 Besides the obvious irony of the homeless person in front of the bank, I like this photo for a different reason. Despite living out of a number of bags, this woman took the time to put on eye makeup and paint her nails. Even the homeless aren’t without their small vanities. 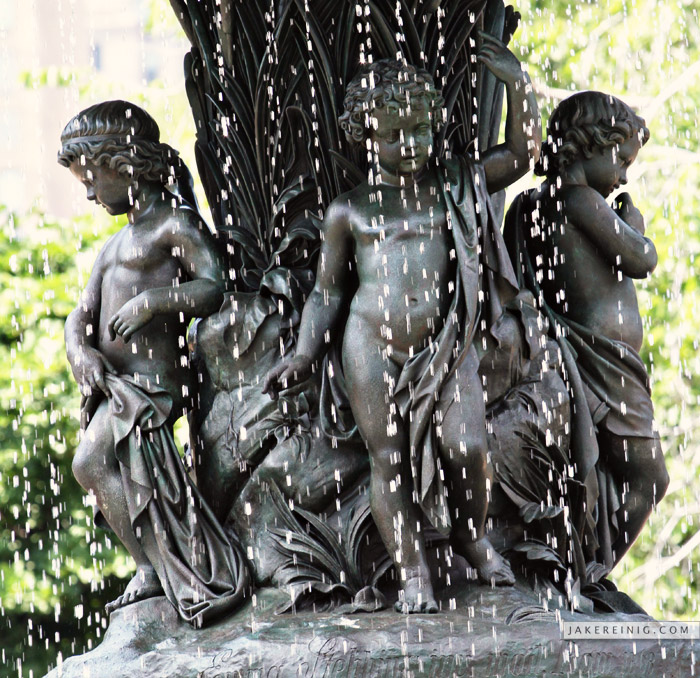 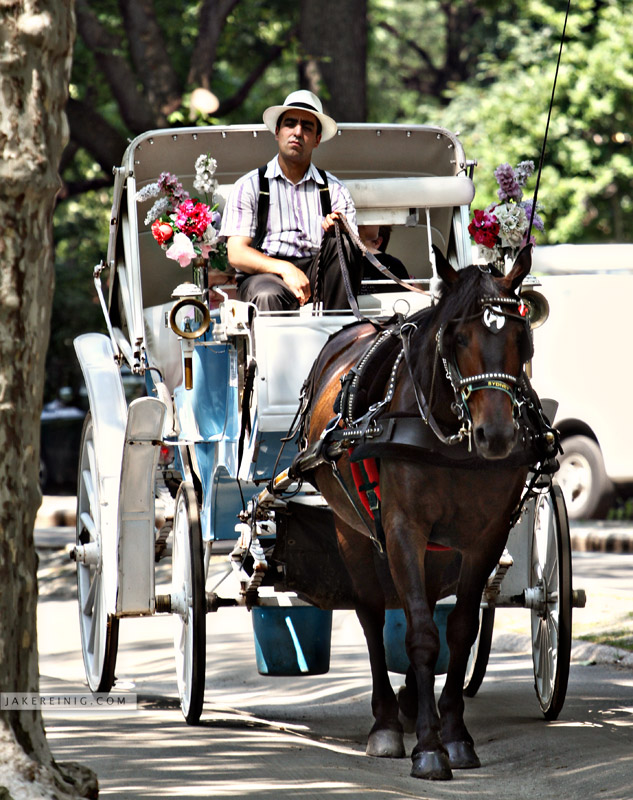 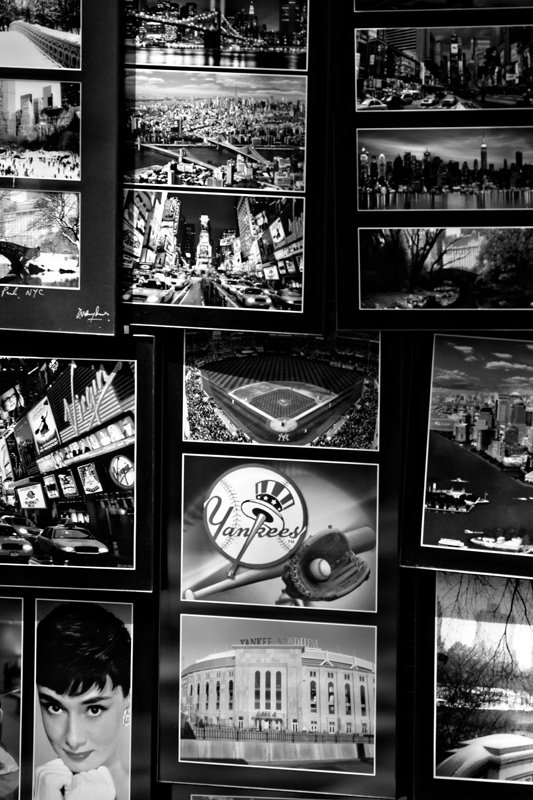 As with most tourist areas in the world, Central Park was surrounded by vendors selling miscellaneous junk. In the middle of all this noise I randomly came across a vendor selling figurines made from dried grass. I bought a butterfly that I liked and then promptly crushed it on accident. 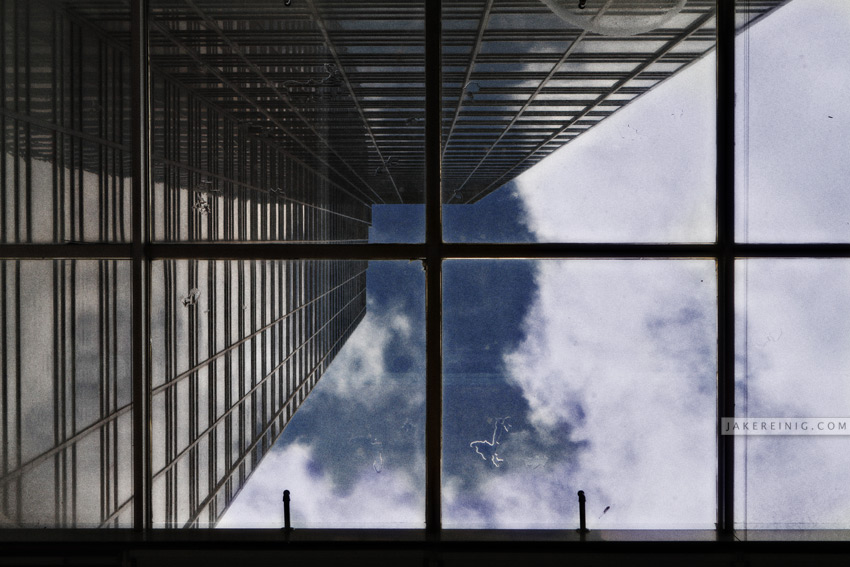 In the middle of MOMA, I happened to look up while going down an escalator. I think I rode the up and down escalators three more times trying to get this shot. 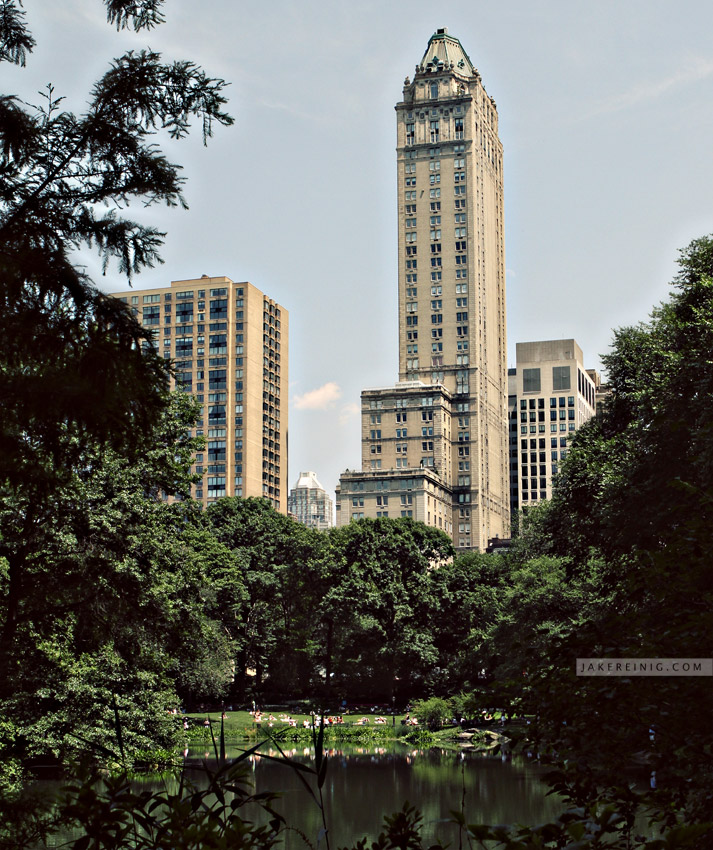 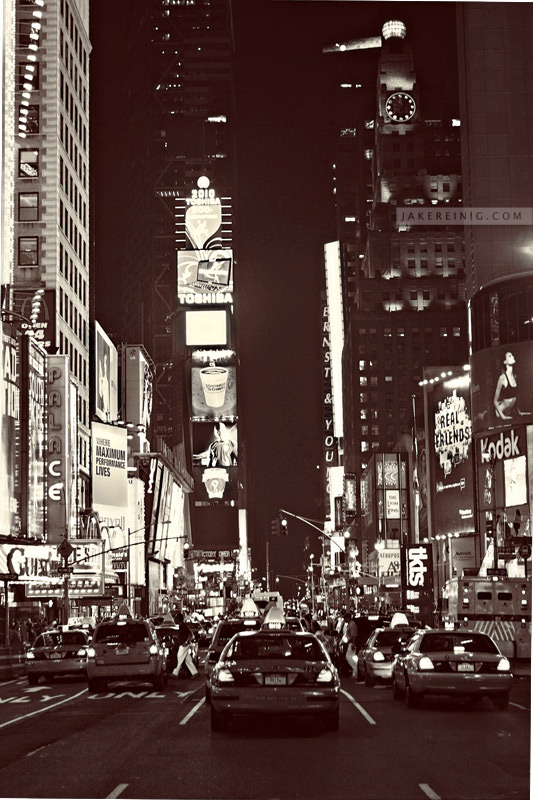 Standing in the middle of the street, somewhere near Times Square. 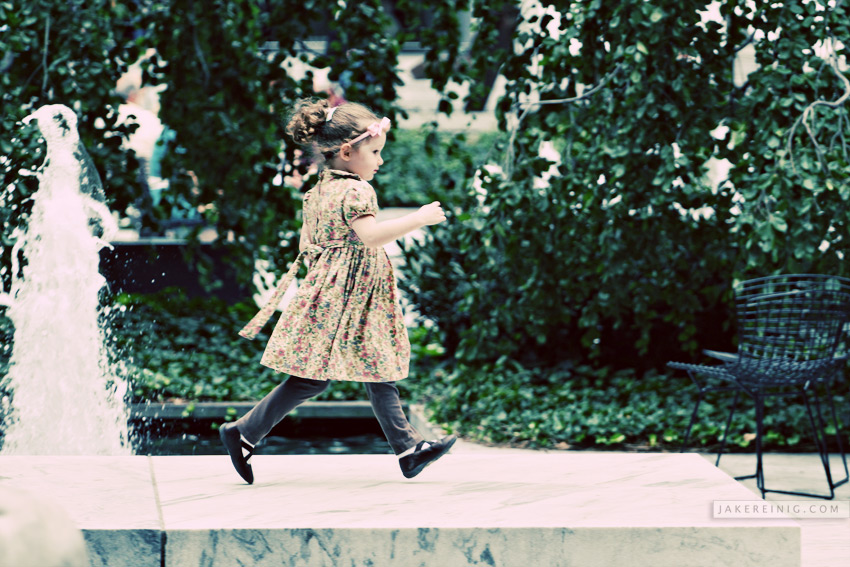 This little girl would run across this bridge to a nearby open area and then spin around rapidly while doing an imaginary dance. She’d fall over, run across the bridge to hug her mom and get a spoonful of pudding, and then do it all over again. Shot in the sculpture garden at MOMA. 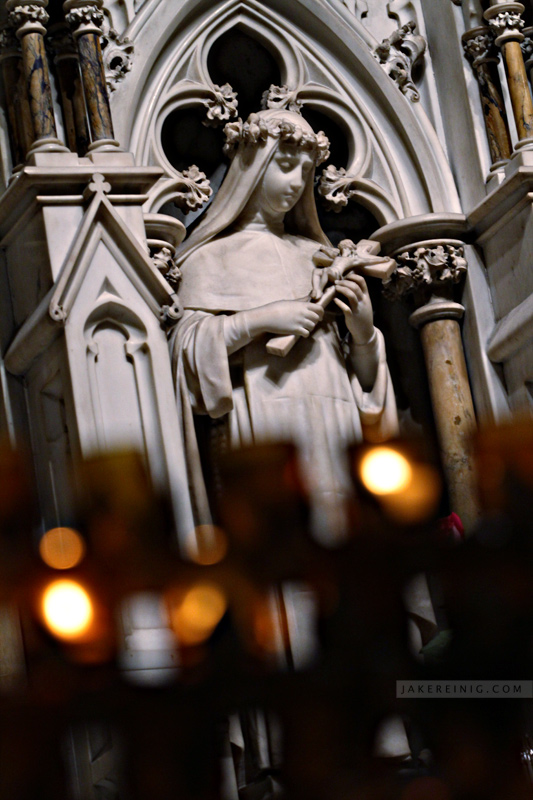 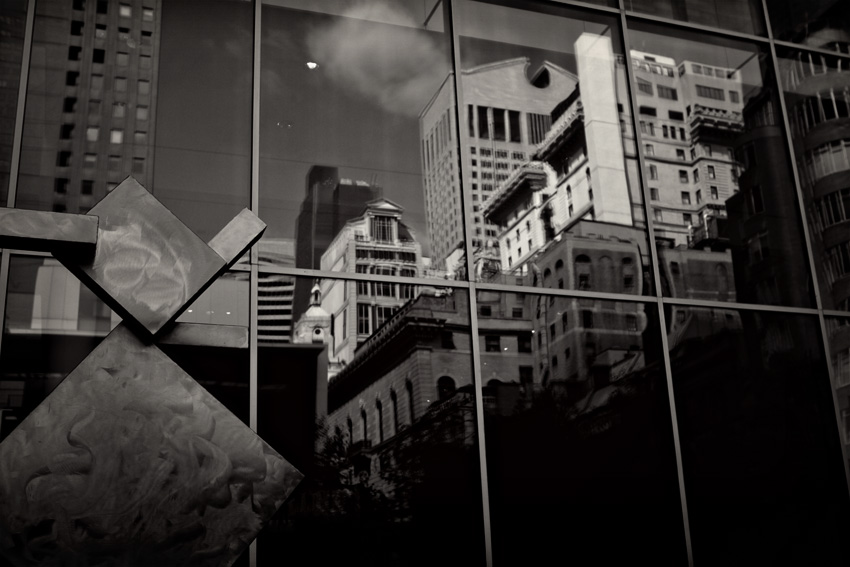 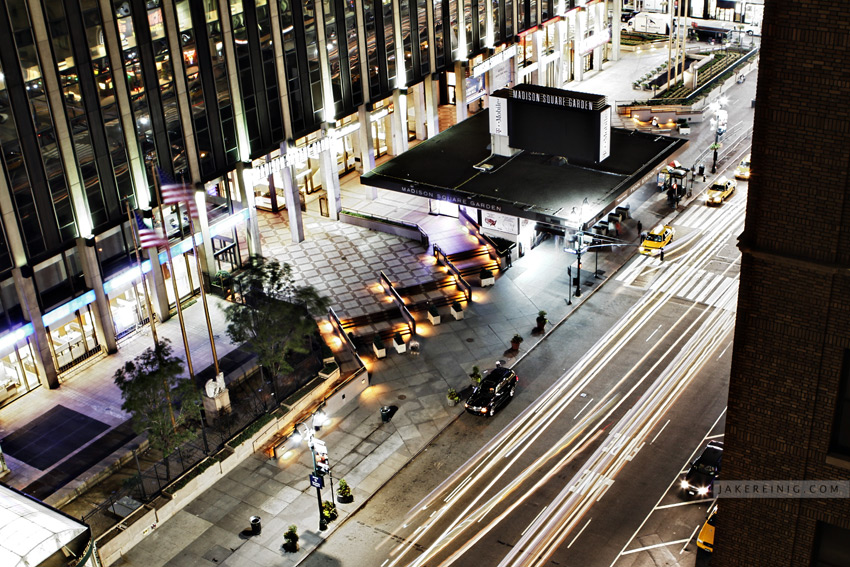 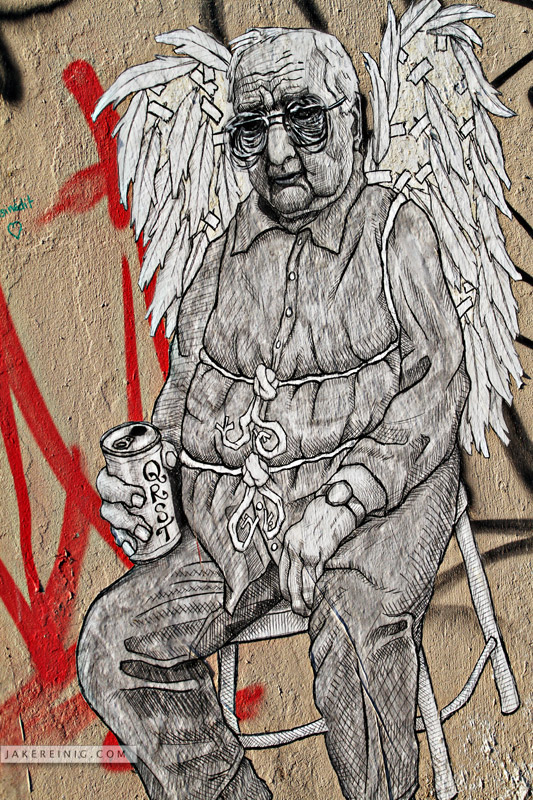 Another example of incredible urban art found on a random wall. Green Point, I think. 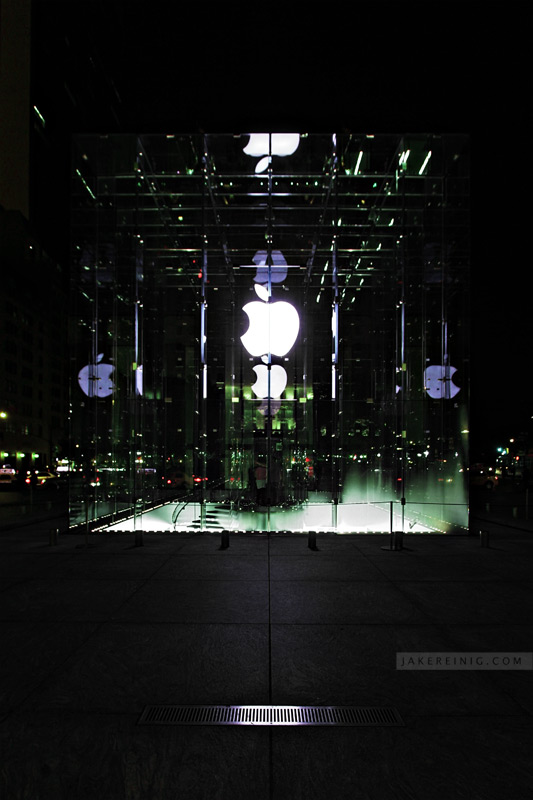 The Apple store near Central Park. The exterior is awesome looking. The interior looks like an Ikea showroom and is boooooooring. 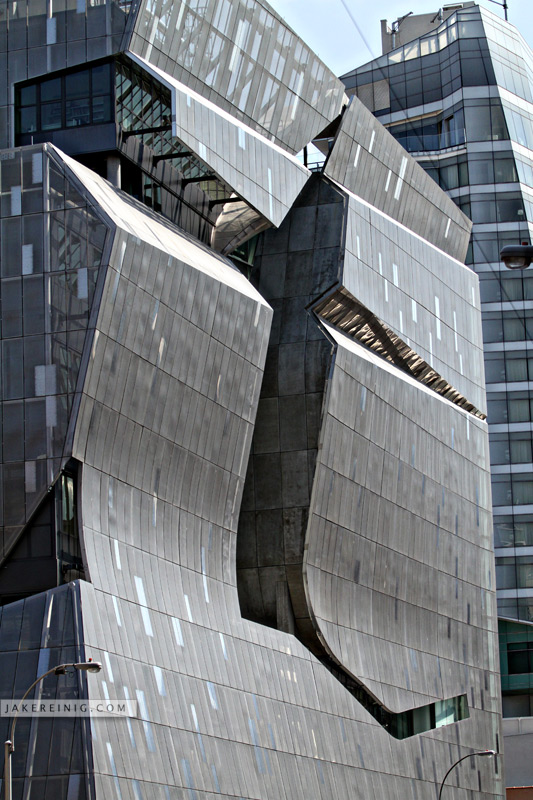 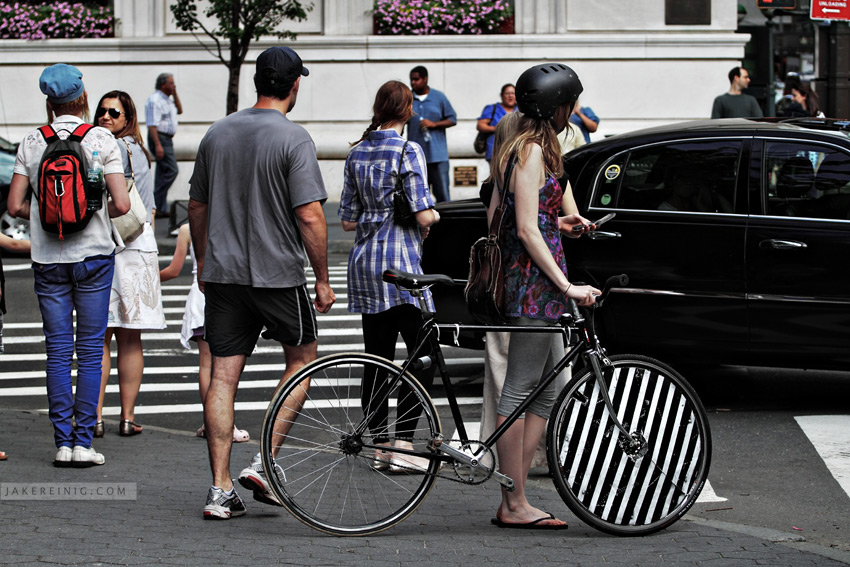 Hipsters and their trademark single-speed bikes are everywhere in the city. I think if I were 8 I’d be impressed by the front tire, but I’m not, so I’m not. ;) 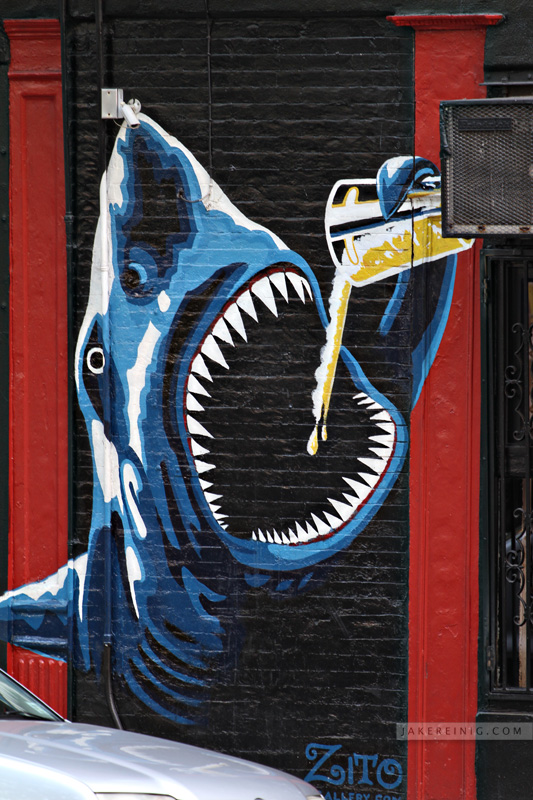 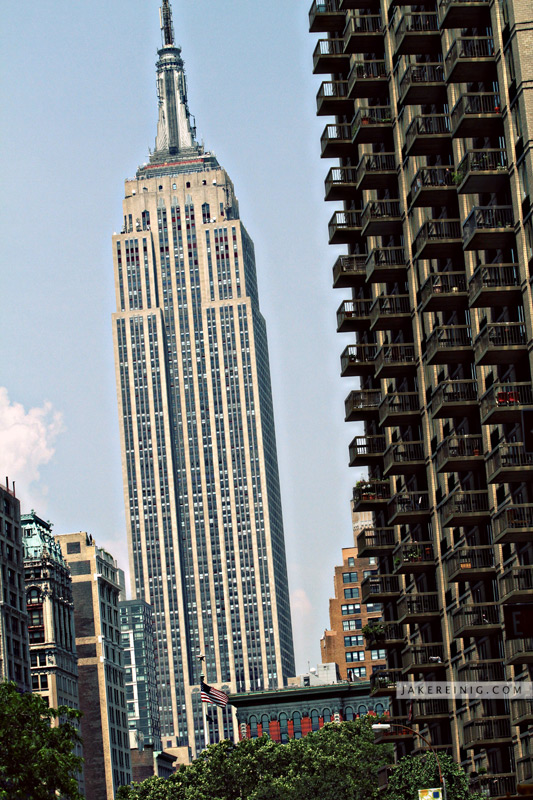 One of the few skyscraper photos that I’m actually happy with. Does this building look familiar to anyone? 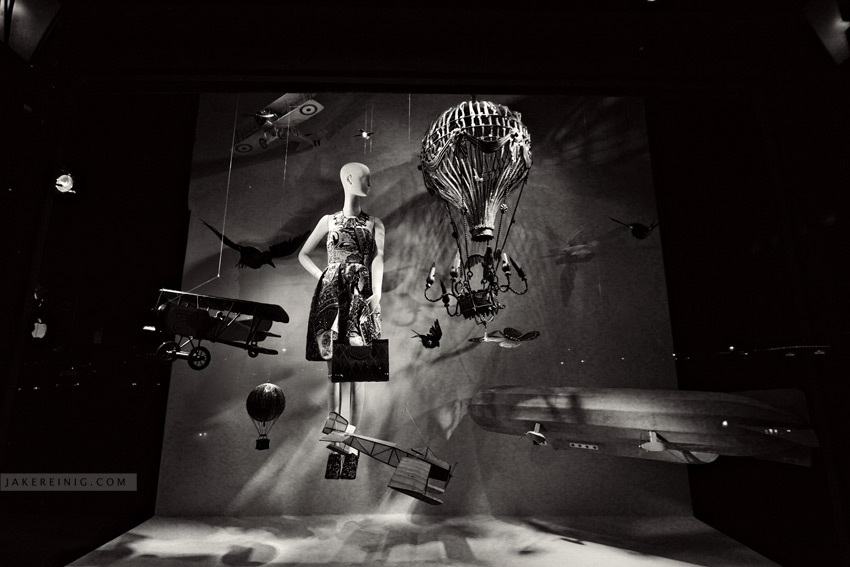 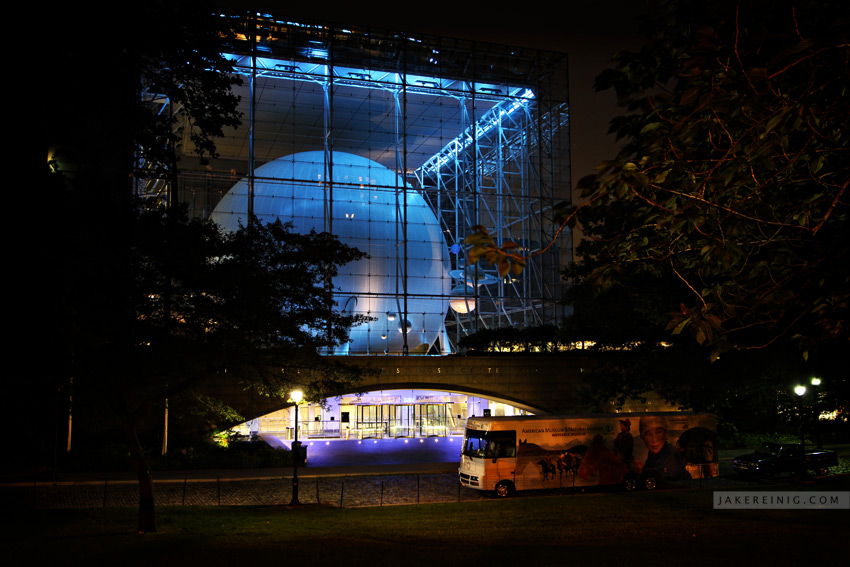 The Planetarium at night. 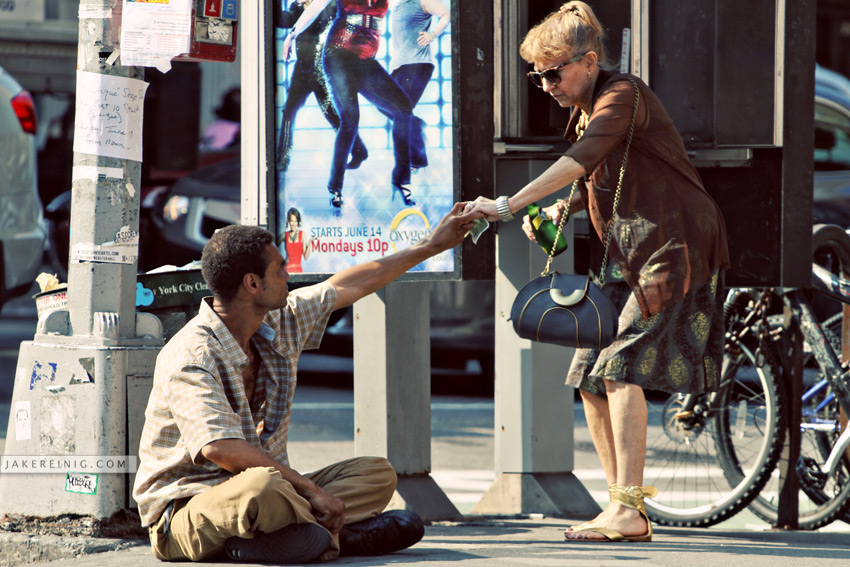 “The Creation of Adam” 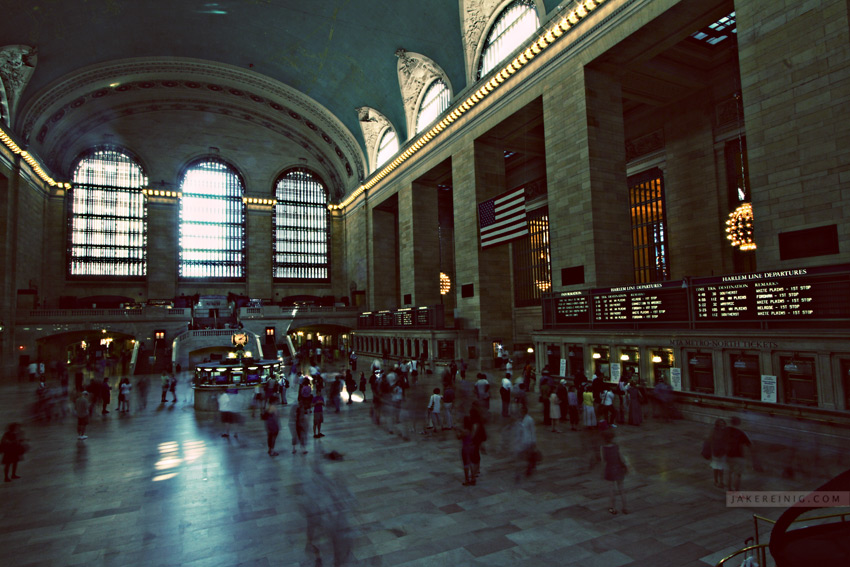 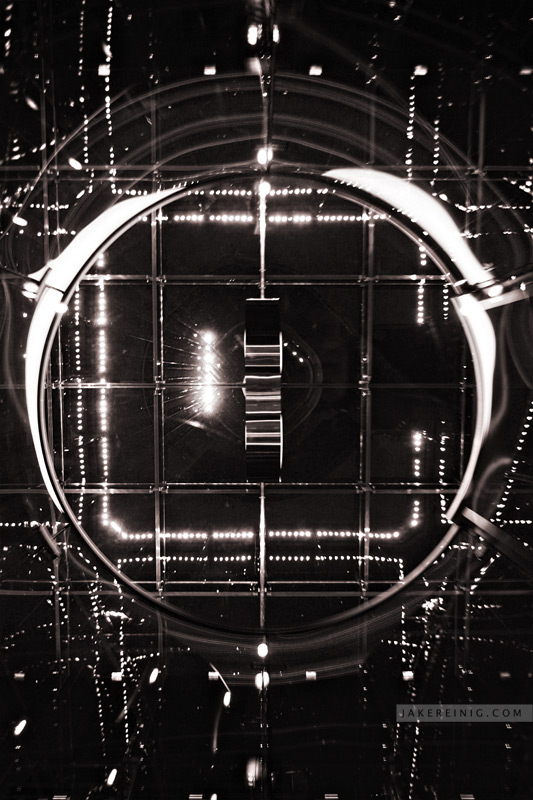 $10 to the first person to tell me what this is (AJ and Ania excluded). 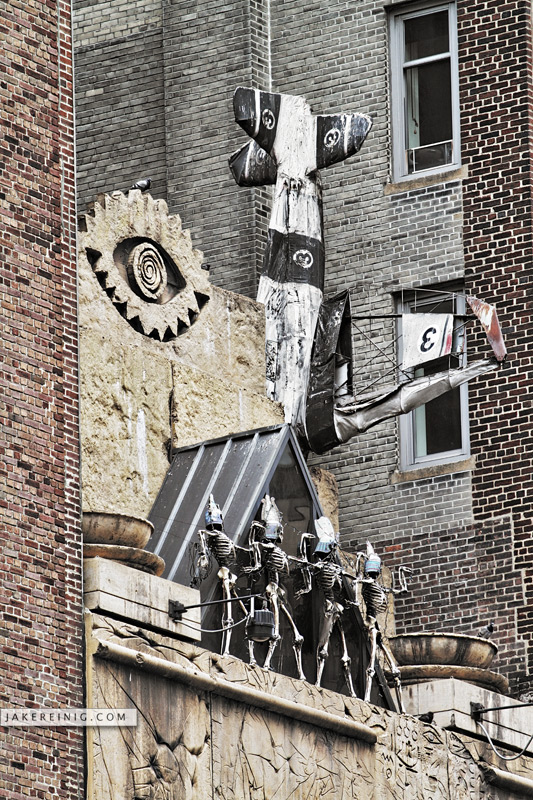 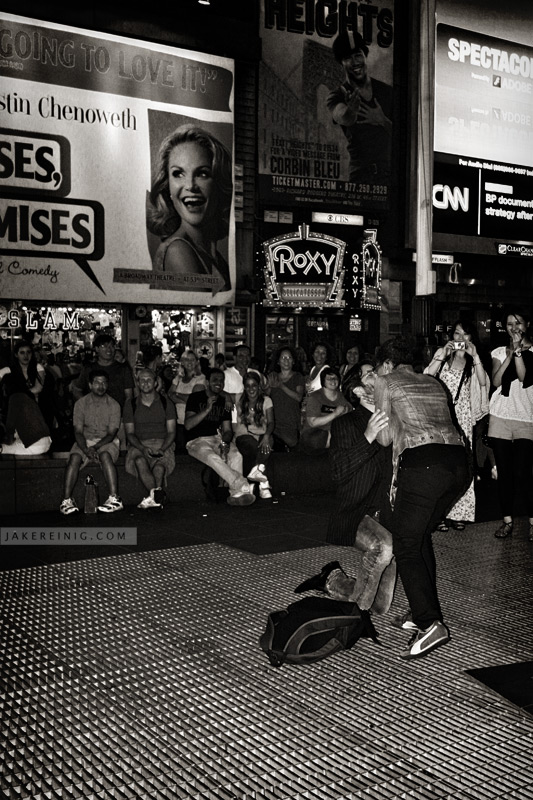 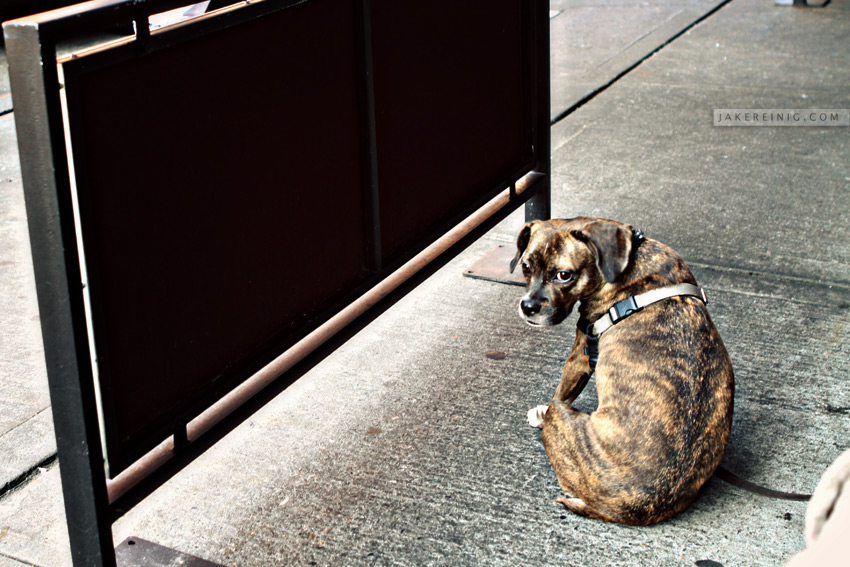 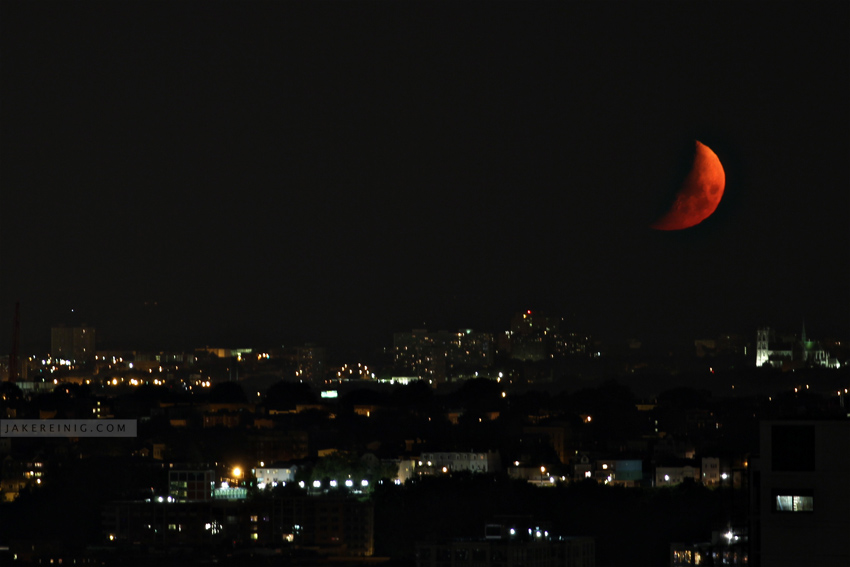 After flirting with the front desk clerk for a little while, she upgraded me on the second night to a top floor room looking out towards Jersey and the river. After a long day on the town, I was lucky enough to return to the room just as the moon turned bright red and set over the horizon.

If there’s one thing I’ve learned from my travels, it’s to interact as genuinely and frequently as you can with the people who really make cities spin. Tip your waiter a little extra, shake hands with doormen, and offer a smile whenever you can. The reward is often rare moments like these.

(The first image in this post is shot in the same direction, but near sunset a few hours earlier.)

Back in Time
Section 8 at House of Blues