There are three components to every exposure: aperture, ISO, and shutter speed. In order to get a correct exposure, each of these three values must be adjusted in a relationship. We’ll look at how that relationship works in a subsequent article, but for now, we’ll look at aperture.

Aperture controls two aspects of every photo. The first is the amount of light that strikes our film or sensor, and the second is the depth of field in our image (more on that in sec).

Let’s look at the light issue first. Imagine that you have a pair of sunglasses on. If you add another pair on top of the first, the amount of light that can reach your eyes is reduced. If you add more sunglasses, the light reaching your eyes will be reduced still further until you add so many that the scene is too dark and you can’t see anything. On the other hand, if you don’t have enough sun protection on, the scene might be too bright and you’ll have to squint.

The aperture opening is similar to this. The bigger the aperture, the more light can get to our digital sensor. The smaller the aperture, the less light can get in (sort of like adding or subtracting sunglasses). What confuses a lot of new photographers is that bigger apertures are represented by smaller numbers. For example, f/2.8 is a larger aperture than f/11. This is because the aperture is a ratio, the details of which we don’t need to get into now. You just need to know that when you’re considering which aperture to use, the smaller the number the greater the amount of light.

For the sake of illustration, let’s suppose that we’re taking a picture of a flower in front of a bush. The flower is about 3 feet from our camera. If we shoot with a larger aperture (say f/2.8), the flower will be in focus and the bush in the background will likely be out of focus. If we shoot with a smaller aperture (say f/22), the flower and the bush will probably both be in focus. 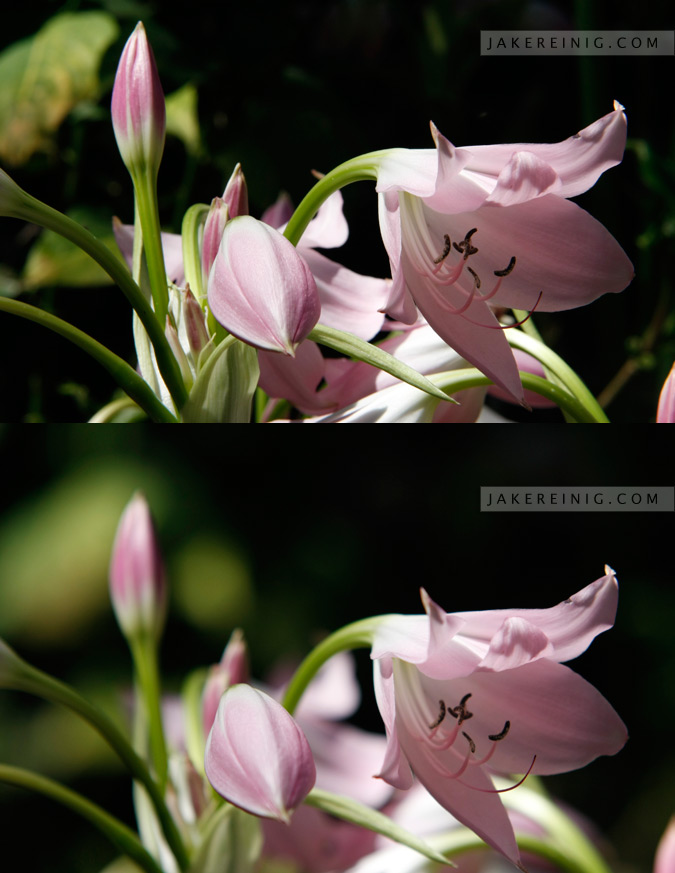 Which type of effect you choose is a creative decision, although at times it may be determined by the amount of light in the scene. For example, if you want to have an entire scene in focus but it’s dark out, you may need to use a wide aperture to let in more light. Doing this might reduce the depth of field. The opposite would be true of course: if it’s very bright out you may not be able to use a large aperture, and may get more of the scene in focus than you desire.